ceremonial use of lights in Indian Culture 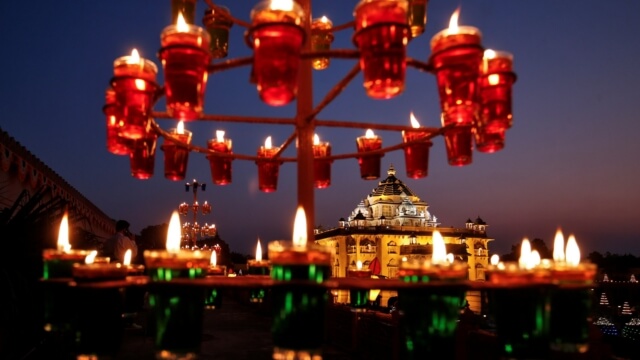 Philosophy of light according to Hindu mythology- In Indian culture light (Jyoti) is not just the opposite of darkness, it is the symbol of faith. When the clouds of darkness which is ignorance and unholy cover our mind’s eye, it is the light of faith and knowledge that revives us from that darkness. Hindu philosophy talks about light being the sole propagator of truth. The meaning of life is seen through the light of God which clears a path of enlightenment for all human beings. It is the incarnation of the divine himself, a physical state that we can see, something that we can feel. The knowledge represented by light leads us to a life of Dharma.

Understanding light in contrast to the darkness

In this vast universe, there is light and where there is no light there is darkness. The existence of light is dependent on darkness. In our holy scriptures, it has been seen that the dominion of darkness can never sustain against the light. Light symbolizing knowledge which has the ability to overcome darkness, unenlightenment. When we take a walk at night under a clear dark sky, cloudless, moonless, we see that the stars shine brighter besieged by the night. This is because the dark sky acts as a canvas on which the stars get a place to shine. In the same way the greater the evil or ignorance, the greater we will understand the value and significance of light that takes us away from foolishness and sheer unconscious towards knowledge and fulfilment.

Light, since the beginning of civilization, has been considered to be a form of God himself. God is knowledge, he sustains life and nurtures everything and light does the same. It provides a vivid path for us to follow, a path that will lead us to prosperity. In the olden days, it was believed that a house that doesn’t have brightly lit rooms and verandas is a place for the devil himself. There is no question of darkness where there is light, god is that light for us that separates us from all the material desires and walks with us toward glorifying knowledge.

Inclusion of lighting lamps in ceremonies after the Vedic period

Lighting lamps was not a tradition during the Vedic periods when the centre stage was occupied but the fire-altars. This fire alter was created for religious ceremonies where a fire was lit through chopped woods and offerings were made to the fire god (Agni). The use of lamps was introduced into these ceremonial practices during the Non-Vedic period when the gods became more iconic and were not abstract entities anymore.

Lamps being used to pray to God

After the subtle introduction of lamps in the religious ceremonies, it became a symbol for submission toward the lord. It replaced the fire-alters and with it the abstract gods. A quotation from Gita says-

“He is the source of light in all luminous objects. He is beyond the darkness of matter and is unmanifested.”

Here we see that light is presented to be as the essence of Lord himself but there is no clear knowledge if this light symbolises the lighted lamps. We all have come across pictures of deities where the hair of the gods or goddesses is illustrated by flames and in some pictures, we might have seen that flame being placed in their hands. This representation of fire being connected to our deities gives us an idea as to how these lighted lamps please our gods.

Diwali which is also known as the festival of light is celebrated during the fall. Light in this festival represents power, the victory of good over evil, and the presence of the lord in our households. In the northern parts of India Diwali is celebrated to rejoice the return of King Ram with his wife and his brother Laxman after being exiled for fourteen years in the forest. In the southern parts of India, this celebration is to rejoice in the victory of Lord Kali over the demons. She portrays the power of good and righteousness over evil and malice. During the celebration both in the north and south people light earthen lamps filled with ghee or mustard oil, they dip a cotton wick in every earthen lamp. These lamps are put in every doorway of the house. The light and the smell of ghee it purifies the environment of the home and creates a protective shield from all the evil that lurks around us.

Arti is a centuries-old tradition of worshiping where they devote lights lamp and waves it in front of the idol of the god he or she prays to. It is a show of respect and also an act of submission in front of the higher power. The custom of Arti is not only done to praise God but also to pay our respects to the unanimated objects. In Vishwakarma Puja, we do Arti of all the mechanical objected. In Hinduism, we believe that every object regardless of its shape and size instils god in it. During Arti ceremonies in temples, we can notice that towards the end of the Arti the Pandit or the person holding the lighted lamp in his hand turns the lamp toward the devotees. This is because according to Hindu philosophy we humans  are an extended branch of God himself, he resides in all of us.

Arti comes from the Sanskrit word ‘Aratrika’ which roughly translates as the ceremony of light. Its origins are said to be rooted in the Vedic period when people worshiped objects and abstract entities such as a mountain, sky, rive, etc.

Artis in temples and domestic fields hold a very important meaning in itself. It shows us that doesn’t matter how powerful or how high a position we attain we will always be under the cares of the lord. He is the creator of all the universes and he is our ultimate destination. Arti beings warmth and harmony in our hearts. It is always accompanied by arti songs, incantations, hymns, and clapping. The environment during an arti is very intoxicating, it gives us an out-of-body experience when every living soul in the temple or the house is singing and chanting in unison the name of the lord.

Arti is supposed to be done three times a day, in the morning, afternoon, and evening. Pujas are usually accompanied by arties. It is either at the beginning of the puja or the end of it. Arti is carried out with the help of a metal plate on which we place a lamp which can be made up of silver, copper, clay, or aluminium. This lamp is then filled with ghee which is a clarified form of butter and an old number of cotton wicks are dipped in the ghee which acts as a fuel for the lighted wick. After lighting the wick the pandit (priest) makes circles with the plate around the deity, three times clockwise and three times any clockwise. Through this process, it is believed that the metal plate and the flame of the lighted lamp absorb the divine energy of the lord. After the completion of this process the priest offers the lighted lamp for the devotees to move their hands over. They cup their hands and move it over the flame and then put it on their forehead, this way they get purified through the blessing of the lord.

There are generally 5 types of lamps-

It is a lamp which is usually made up of brass. Around the back of this lamp, we can see a depiction of the goddess Lakshmi. It has a grove for only one wick at the centre of the lamp. This lamp is used mostly during Lakshmi puja and Ganesh puja.

This type of lamp is made out of bronze and usually has a stand to balance it. It holds only one wick at the centre of its height.

This lamp is made out of either brass or bronze. The most attractive feature of this lamp is its design. It portrays two maidens holding a vessel in their hands. It comes in different sizes.

This type of lamp is made out of brass or bronze. The special thing about his lamp is that this lamp is attached to a chain which is held by the priest. It has grooves for multiple wicks.

The panchamkukha deepam is one of the most recognisable forms of lamps. It has grooves for 5 wicks. This lamp used to pray to the lord for prosperity and wealth.

Meaning of different structures of lamps

Eka Mukha Deepam is generally used to pray for the welfare of the family and the people who are close to you. Dwimukham Deepam has two wicks and is said to have a calming effect on people. It being family and friends together in consonance. Thimukha Deepam has three wicks and is said to bless devotees with children when they pray for a new life. Chathurmukha Deepam which has four wicks brings about all-round prosperity and harmony in the devotee’s life. Panchamkukha Deepam is said to give wealth. These five faces of the lamp show five qualities in humans which are affection, intelligence, patience, caution, and resoluteness.