Unwind the history, architecture and trek to Bhimashankar Temple 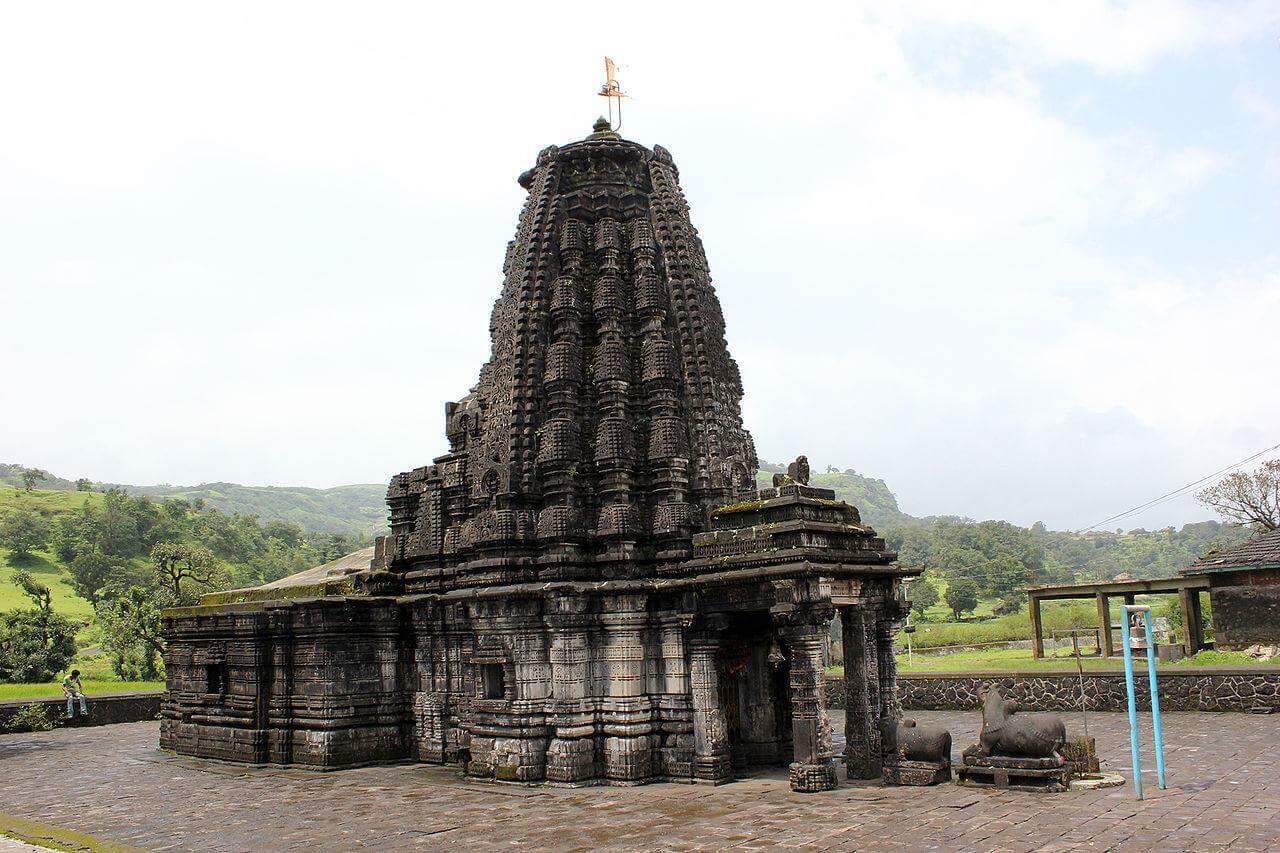 Maharashtra, the place is blessed with fierce warriors like Chattrapati Shivaji Maharaj, Ahilyabai Holkar, Tanaji Malusare, the Bajirao’s, and many other honourable mentioned. The place with rich and diverse flora and fauna throughout the western ghats and the mesmerizing Konkan coastline. The people of Maharashtra are largely influenced by the geographical conditions and the same applies in their respective cuisines too. However, this article will highlight the features of Bhimashankar temple, Maharashtra.

In addition to that, the state of Maharashtra has several ancient temples that have been a part of the traditional stories and have been mentioned in the Vedas. They even include pilgrim places. Mahalaxmi Temple, Tuljapur, Trambakeshwar, Grishneshwar, etc are some of the notable ones. One such prestigious temple in Maharashtra is the Bhimashankar Temple in the Pune district, Maharashtra.

These temples have impacted the people of Maharashtra in various ways like understanding culture, celebrating diversity, to have a seamless tour of the history surrounding the temples. After the Mughal invasion, a lot of temples were destroyed and harmed tangibly which has resulted in the loss of some great artwork and other stories carved in the form of sculptures and paintings. Bhimashankar temple is one such example of ancient art and culture.

The people of Maharashtra have always had huge respect and pride for their temples and that has helped the temples to rise and get the limelight that they deserve. There are several festivals and seasons wherein the hardworking farmer’s community participates in hundreds of kilometre-long pilgrim parades which end at a couple of renowned destination temples like Pandharpur.

Chhatrapati Shivaji Maharaj was blessed with a sword by Goddess Bhavani who’s temple is one of the most visited one in Tuljapur district.

It is one of the most ancient temples in Maharashtra and the whole of India. The Bhimashankar temple is also one of the 12 Jyotilings which are spread all over India. The history behind the formation of the temple is as interesting as the architecture of the temple. Let us dive in to understand this marvellous structure, the stories, and the historic importance of it.

Location and about Bhimashankar temple

Bhimashankar Temple has situated 50 km from Khed taluka near Pune, Maharashtra. Geographically speaking, the location of the temple is prominently in the western ghats also known as Sahayadri hills in Maharashtra. Bhimashankar is also the origination point of the river Bhima, which then fuses with the river Krishna to meet the Bay of Bengal. Talking about the 12 Jyotirlinga all around India, In Maharashtra, there are a total of 5 Jyotirlingas (Trambakeshwar in Nashik, Bhimashankar temple in Pune, Grishneshwar temple in Aurangabad, Aundha Nagnath in Hingoli, and Parli Vaijnath in Beed) due to which there is a huge concentration of pilgrim every year.

The Bhimashankar temple is quite away from any city around which makes it more difficult to reach the place. As mentioned before, the temple is situated in the western ghats for which there is quite a climb. With dense forests around it’s an amazing way to walk through nature but one should be aware of the animals around. To discern the nature, there is also a trek to Bhimashankar temple which includes a long walk around the plateaus, climbing slimy rocks, old worn off ladders, and if monsoon time then dense fog and the nature covered in mist.

Formation and History of Bhimashankar temple

Stories regarding the formation of the Bhimashankar temple refer back to the time when the earth was a place for gods to reside. A demon named Bhima stayed in the forest around Bhimashankar who was the son of the demon king Kumbakaran, brother of Ravana. While wandering in the forest he got to know that his father has been killed by Lord Ram, the incarnation of Lord Vishnu. After hearing that, furious Bhima decided to take revenge.

He started meditating and did severe penance to impress Lord Bramha for several years. Looking at his dedication, Lord Brahma completed his wish of having to be the strongest of all. He started the destruction by defeating Lord Indra and my other god. Then, he defeated Karpureshwar (King Priyadharman) who was a hearty devotee of Lord Shiva. The king was imprisoned where he started worshipping Lord Shiva in form of a Shivaling.

Bhima saw this happening and barged in with the sword to strike the linga. Before striking, Lord Shiva appeared from the Linga and war broke between them. Lord Shiva defeated Bhima by turning him into ashes. All the gods then appealed to Lord Shiva to stay back and that’s where the Bhimashankar temple is today with all its might and beauty in the mountains.

This story adds up to the importance of this temple supporting it with the tales. Geographically, the temple is a part of the Bhimashankar Wildlife Reserve which is home to several native species and rich in flora-fauna. Initially, the Shiva linga was found around this place and is said to be placed on the top of the temple where it is situated right now. A small temple was built and that’s when the pilgrim started to flock.

The temple is situated on hard Basaltic rock with Deciduous, Semi-evergreen, and Evergreen forest. The rainfall is very high due to high altitude but goes through an acute water shortage during summers. The reserve area stretches up to Thane district near Mumbai.

Structure and Architecture of the temple

The Bhimashankar temple is basically in the Nagara style of architecture referring to literature from the 13th century. The temple is said to be built in the 18th century. The architecture is intrigued and portrays the skill of the workers. All the different parts of the Hindu architecture of temples like the Garbhagriha, Mandapa, Shikara, Kalasa, and Ardhamandapa are all seen in this temple.

Intricate designs of holy beings, human beings, and other heavenly designs all around the temple on every level including the door frame. The Shiva Linga is right in the centre of the Garbhagriaha. There are many other small temples around the main temple with similar intricate designs of different gods. The Gopura-shikhara was later built by Nana Phanavis, who was a minister in the Maratha kingdom during the Peshwa rule.

The unique design of the Bhimashankar temple is something different than the other ones.

Many rulers and kings in Maharashtra have made their contribution to the restoration of the temple. Chattrapati Shivaji Maharaj has been said to have performed worship practices and offer his respect to Lord Shiva. Saint Dhyneshwar has also visited Bhimashankar temple and Trambakeshwar during this religious wandering. Dada Phadnavis had built the Shikara for the temple.

A large bell with a carving of Jesus and Mother merry is sighted outside the temple which was presented by Chimaji Appa (Brother of Bajirao 1 and Nadasaheb Peshwa’s uncle). 5 such huge bells were seized from the Portuguese ruled Vasai fort.

There are around 200+ steps to reach the temple from a plateau that is there since the temple’s existence. There are local vendors on either side of the stairs selling refreshments, snacks, etc. The Bhimashankar temple structure and architecture are quite welcoming.

It is that type of a temple where an individual can touch the deity in the sanctum which creates a special satisfaction to the pilgrim and increases the attachment with the atmosphere of the temple.

Understanding the art, and efforts taken to make it happen in these temples is the manifestation of you bothering to notice the place. To appreciate these temples will simply enlighten our approach towards small things that we fail to appreciate for example the basic art that we see while we grind in the rat race. With that being said, let’s get to know the surroundings of the temple.

Around the Bhimashankar temple

The reserve’s forest cover is profoundly filled mostly by Southern tropical Semi-Evergreen forests, Deciduous and Evergreen forest type. A mix of all types of forests can be seen depending on which season you choose. There is a variety of green cover which includes trees, plants, herbs, and shrubs found in this region.

One can easily spot plants and trees like Mango, Hilda, Bamboo, Jamun, and more, which are the predominant plant species of the reserve. If one venture into the park during monsoon, it has a completely different feel with plants and other fungi of abnormal sizes make you realize how little we know about nature.

Animals that are indigenous to the reserve are Leopard, Jackle, Sambhar, monkey species like langur, apes, etc. The reserve is home to several amphibians, reptiles, etc.

It is one such place close to the two busy cities of Maharashtra Mumbai and Pune wherein people can come leaving back their busy lives and cutthroat schedules, breath, understand nature, give some time to find the real yourself without harming or disrespecting nature in that area. The best way you can interact with the reserve is the trek.

Other places like the origin of river Bhima, Gupt Bhimashankar, Bhorgiri fort. It is a 130 sq. km reserved forest area declared by the state of Maharashtra.

For every individual to truly understand and blend into the nature of this reserve, trekking and exploring is a perfect way!

To initiate, the trek starts from a small village called the Khandas in the Karjat district. It is a 4.5 hours gruelling trek that requires some extra effort to scale. The height of the trek to be scaled is about 3250 feet.

It can challenge your fitness, body endurance, lung capacity, and stamina. The path includes heavy boulders, steep climbs, use of stairs to reach the difficult parts of the mountain. During monsoon, there are beautiful waterfalls, streams along the path which enhance the trekking experience and make it even more fun-filled.

The trek can be ended at the temple of Bhimashankar on the hill. If lucky enough, one can spot different birds, animals but being aware of the surroundings is more important than anything else while walking through dense forest.

How to reach Bhimashankar temple

There are two ways of reaching Bhimashankar temple from the two major cities Mumbai and Pune.

Take the traditional route from Mumbai to Pune. Before Pune, take a detour to Chakan then connecting to the National Highway 50 to Bhimashankar temple. It takes about 5-6 hours by a private vehicle and 7-8 hours by a public vehicle.

From Pune, hop on to the Pune-Nashik highway and take a detour to Bhimashankar through a steep ghat up the hill. It takes about 4-5 hours to reach Bhimashankar from Pune city. The timings of Bhimashankar temple are from the first aarti at 4:30 am to the evening aarti at 8:30 pm.

Just like the state of Maharashtra, many other states too have such amazing temples hidden in dense nature for which India is known throughout the world. It is important to know about such places as it gives us a broader perspective of the place and the history of our country. It is also important to respect nature and the animals in the area by simply appreciating it by causing no hindrance or littering the place. Let us contribute equally to make our history and ancient architecture more renowned. India is without a doubt Incredible!