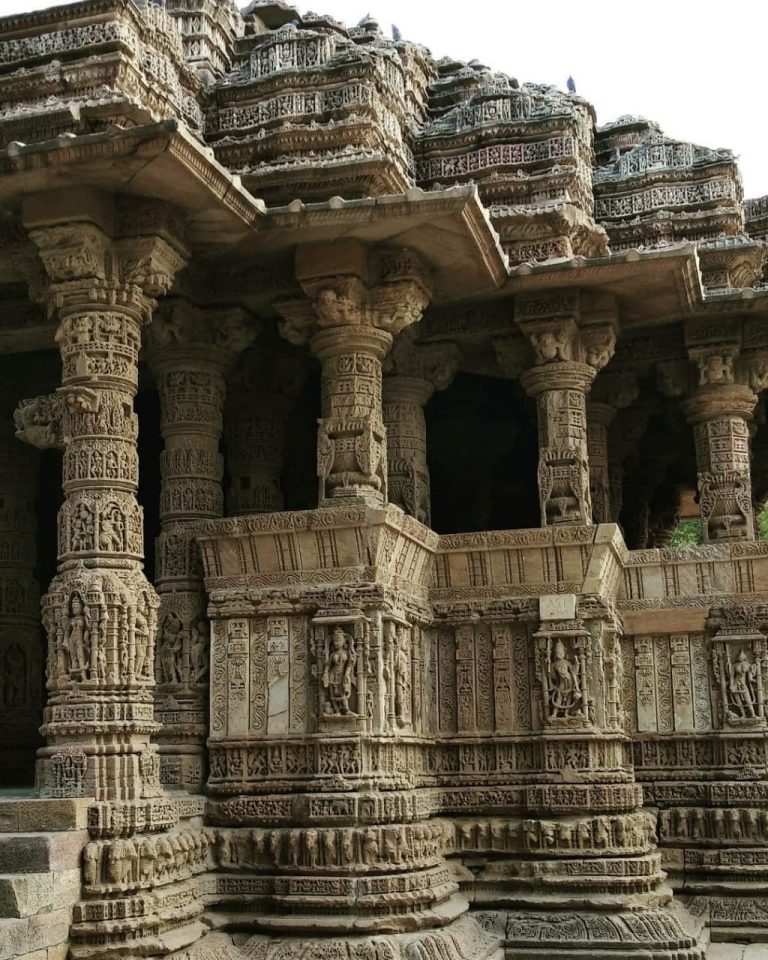 About the Sun Temple

The Modhera Sun Temple, Gujarat, is one of the main attractions of the state. It falls exactly on the Tropic of Cancer (23.5836° N, 72.1401° E). Situated in the village of Modhera, the sun temple boasts of a rich culture unique to it. It was named one of the UNESCO World Heritage sites in 2014.

Constructed during the 11thCentury, the famed Hindu temple offers no pujas today. It remains a major tourist attraction though. It is also believed to be one of the oldest Sun temples in India. Nearly a sister, the Konark Sun temple was only built much later, in the 13th century.

Known as Uttarardha Mahotsav, the Modhera dance festival occurs over the course of three days. It falls in the month of January, after the Makar Sankranti festival. It happens to be one of the major tourist attractions of the state.

The Gunda Mandap of the temple has been constructed in a unique and thoughtful way. Vaastushastra was thoroughly followed throughout the construction of the temple. On the equinoxes, that is on 21st March and 21st of September, the idol of Sun in Garbhagriha is illuminated by the first rays of the sun. The idol is bathed in a breath-taking aura of gold. A sight like none other, the time of equinoxes is sure a special one. What an engineering marvel it is!

The base of the sun temple is in the shape of an inverted lotus. The lotus signifies the affinity for the sun because a lotus flower responds to the sun’s rays. Above the petals, various carvings can be seen depicting the various aspects of life.

Do you know that the sun rays fall on the diamond on the head of Sun God?

What are the 8 directions?

Besides the Surya Dev, there are quite a few deities that have been depicted in the temple. There are 8 deities who represent the 8 directions known to man:

But how was this engineering marvel actually constructed?

The answer lies in the ingenious locking system which gives it its earthquake-resistant ability. There was no use of the lime, cement, mud, or adhesives, these being the very basic material for modern construction. This is an ancient marvel itself. All the stone slabs are interlocked by making grooves and sealed with seasoned wood. Even after the destruction caused by Muslim invaders like Ghazni and Khilji, the structure stood tall against all odds. A large number of columns also increased the structural strength of the temple. The construction of the temple is based on the position of the planets and stars.

The story behind Modhera is an interesting one:

Legend says that after the legendary battle with Ravana, Lord Rama and Sita made a stop here on their way back to Ayodhya. Here, Rama conducted a yajna to cleanse himself of the sin of killing a Brahmin, namely Ravana. The yajna was performed by a local Brahmin who belonged to the Modh community and from there the name Modhera was born. So goes the legend.

The Modhera Sun temple also finds mention in the old texts of Skanda Purana and Brahma Purana. They refer to Modhera and its surrounding forests as the forest of Dharmaranya or forest of righteousness.

Who built the Modhera sun temple?

The speculation has been rife as to who built the sun temple. But nearly all evidence point to Bhīma I of the Chalukyas dynasty.  The year was 1024 AD when Mahmud Ghazni invaded the kingdom ruled by Bhīma I. It went down as an unfortunate event for the invaders as Bhīma emerged victoriously. So it is said that the temple was constructed to celebrate this victory.

The exact year of the construction also remains fuzzy. The closest year we can put a finger on is 1026-1027 AD. The western wall of the temple has a block with an inscription in Devanagiri script, which reads “Vikram Samvat 1803”. Due to the fact that the block appears upside down, the exact year of construction still remains a puzzle among the historians. A marvel of the Solanki architecture, the temple is way older than the Konark Sun Temple which was built in the 13th Century.

Built-in the Chaulukya or Maru Gurjara style, the Modhera Sun Temple is a treat to the eye of the beholder. The sun temple, one its kind, is a tribute to Surya Dev. Abound with exotic carvings and numerous pillars, it tells the tale of an architectural style way ahead of its time.

Apart from the figures of God Surya, the temple has depictions of Gods and Goddesses like Shiva, Vishnu, Brahma, and Naga. Beautiful carvings of not only the deities but also of flora and fauna are seen on the walls radiating with the passion of those who sacrificed their days and nights in the construction of this marvel.

The structure of the Modhera Sun Temple has three main components, namely;

Sun temples are usually constructed with large tanks or kund. These Kunds, according to the Vedas, depict the divine sun emerging from the cosmic waters. The Surya Kund of Modhera sun temple is known as the Rama-Kunda and it is an enormous rectangular water holding tank that covers an area of 21,000 sq. feet. The main opening lies to the west.

There are steps of rectangular and square dimensions that take you from one terrace to the other. The terrace walls have depictions of many goddesses including that of Vaishnavite deities like Shitala. Devotees visiting the temple to offer prayers stop here for ablution, and then would proceed further towards the temple with a cool mind to offer oblations to the Lord.

The main temple is known as GudaMandap and is supported by a lotus-shaped base. The Mandap was designed as such that the idol received the first rays of the sun. It is 51 feet 9 inches by 25 feet 8 inches. The walls have carvings of God Surya with dancers and other figures sitting around him.

The shrine has three niches on the inside as well as the outer three windows with depictions of the Sun God. There are also many carvings on the wall depicting human life in the form of the vicious circle of birth and death. The walls and the base of the shrine are covered with ornate carvings of a different kind.

The adisthana, the base, has cyma recta carvings-lower part convex and upper part concave carvings. Followed by this we have elaborate depictions of Padma or lotus. Then we have the chaja, which is thin bands (pattas) at the lower edges. Followed by a series of chhaja are the Gajathara, which are depictions of elephants. It does not stop here, for we have the Narathara, which depicts a man in his various emotions.

Sabha in Hindi means assembly and as the name suggests this hall was used for the purpose of large gatherings. The structure built in parallelogram shape stands 23 feet high. All the four sides are filled with 52 intricately carved pillars filled with depictions of gods and the epics. The pillars, arranged in an octagon have given the temple its strength to stand with its head held straight all these years. Each pillar depicts different scenes from great epics like Mahabharata and Ramayana.

The roof was said to be in the shape of a stepped pyramid, but it has fallen prey to the wear and tear of time. Luckily the inner walnut-shaped ceiling remains, which shows us the many tiers with intricate floral carvings. The Sun temple is one of the many ancient engineering marvels of India, which no doubt is a unique portrayal of craftsmanship and artistic skills that flowed in the blood of our ancestors.

One of the most unique features of the temple is the Torana, the elaborate arches that rise from pillars. The Modhera Sun Temple has quite a few of these famed structures. They are either semi-circular or triangular. The Kriti-Torana of the Sabha Mandap is the magnificent arch that tells a tale of architecture way ahead of its time. Sadly most of these arches are in various states of ruin today.

Centuries might’ve elapsed, the pillars might’ve crumbled, and the roof must’ve shattered, but it still manages to elicit a gasp of surprise and awe when it comes into sight. It belongs to a time in the long-forgotten past, which was abundant traditions and culture. Calling theModhera Sun Temple the epitome of temple culture wouldn’t be an overstatement, for its style speaks for itself. It remains, even in its ruins, one of the greatest temples to be built in India. So the next time Gujarat is in your itinerary, head over to the village of Modhera and stand a chance to be bewitched for a lifetime!