Jama masjid or the Masjid-e-Jahan Numa, which means the world reflecting mosque, is one of
the largest mosques in Delhi .The mosque was built by the great Mughal emperor Shah Jahan
between 1650- 1656 ,and is affiliated to Sunni-Islam religion. The cost was estimated about 1
million.

The mosque is located in Chawri Bazar, New Delhi It stands across the road from Red Fort at
the end of Chandni Chowk, just a few miles north of Connaught Place and Paharganj.

Being the largest mosque in the capital, it is built on a 10 m elevation.

As it stands high, steps higher than the street, this makes it a commanding view in all of the surrounding area. It has three entrance gates in the east, north and south. The eastern gateway was used for royal purposes and the smaller gates in the north and south sides were used for other people. 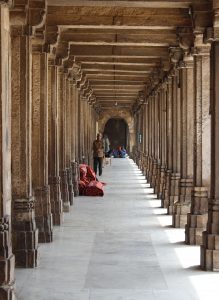 The grand open courtyards, facing the eastern gateway of the mosque can  accommodate about 25,000 worshippers. Two 40-metre long minarets made with red sandstone and white marble were built along the northeast and southeast corners of the building. Some Persian Inscriptions can also be seen above the entrance of the prayer hall. Three large marble domes, with pattern of alternating stripes in black and white marble, ascend from the roof of prayer hall.

The mosque reflects the Mughal style of architecture along with the inflence of Islamic, Indian and Persian architecture. Some other distinctive features are -the displaying of some interesting relics of Prophet Muhammad like-red hair from his beard and his footprints imprinted on a marble and an ancient copy of Quran inscribed on deer skin, and the floor with patterns of black and white marble which resembles a prayer mat for offering Namaz.

This grand mosque was constructed by a great supporter of art and architecture – the renowned emperor Shah Jahan,and it was inaugurated by Sayed Ahmed Ghafoor Shah from (Uzbekistan),who was later made the Shahi Imam.

After the victory of British in the Revolt of 1857, they confiscated the mosque and decided to demolish the mosque as an act of

punishment to the Indians, but the demolition was not done due to the opposition from the
people. This historic mosque is one of the last monuments built during the reign of Shah Jahan.

Two explosions occured in Jama Masjid in the years 2006 and 2010.Due to this destruction, the
mosque was in a very bad condition and needed repair work urgently, but this matter was not given attention.

Still today, the iconic mosque stands majestically as a token of love and brotherhood, where different cultures have united so beautifully as we can see people from many religious groups, along with Muslims visiting the mosque with respect and admiration.