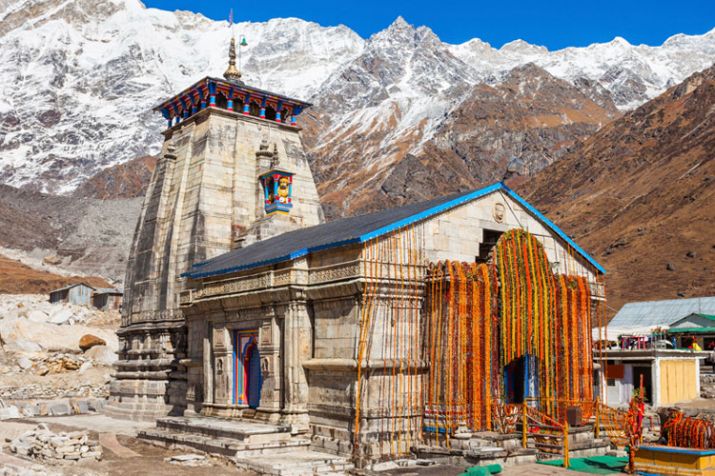 Have you ever heard of the term “Land of Gods?”. Well, yes, Uttarakhand is one such place that is gifted with such amazing temples such as Kedarnath Temple, Badrinath Temple and has been showered up by the blessings of a deity like Lord Shiva. The Kedarnath Mandir or we can say the Kedarnath Temple is a Hindu shrine dedicated to Lord Shiva and is located on the Garhwal Himalayan range near the Mandakini river in the state of Uttarakhand, India. Kedarnath Temple is seen as a homogenous form of Lord Shiva, the ‘Lord of Kedar Khand’, the historical name of the region. During the winters, the vigrahas (deities) from Kedarnath temple are carried down to Ukhimath and where the deity is worshipped for the next six months. Every place in India has it’s own significance and cultural diversity of historic places so does the Kedarnath Temple.

The exact date of the temple’s construction is not mentioned in ancient literature. But if we look at the scientific evidence, a minimum age of about 3,000 years can be considered so Kedarnath Temple’s history dates back to the time when the Hindu legends, had initially built the Kedarnath temple by Pandavas and is one of the twelve Jyotirlingas the holiest Hindu shrines of Lord Shiva. It is one of the 27 Paada Petra Sthalams expounded in Tevaram. Pandavas were supposed to have pleased Shiva Ji by doing penance in Kedarnath. The temple, at a height of 3,583 m (11,755 ft), 223 km from Rishikesh on the shores of Mandakini river, a tributary of Ganga, is a stone edifice of unknown date. It is not certain who built the original Kedarnath temple and when. The name “Kedarnath” means “the lord of the field”: it derives from the Sanskrit words kedara (field) and natha (lord).

According to a mythological account, the god Shiva agreed to dwell here at the request of Nara- Narayan. After the Kurukshetra war, the Pandava brothers, came here to meet Shiva on the advice of the sage Vyasa, because they wanted to seek forgiveness for killing their kin during the war. However, Shiva did not want to forgive them: so, he turned into a bull and hid among the cattle on the hill. When the Pandavas managed to track him, he tried to disappear by sinking himself head-first into the ground. One of the brothers grabbed his tail, forcing him to appear before them and forgive them. The Pandava brothers then built the first temple at Kedarnath. The portions of Shiva’s body later appeared at four other locations; and collectively, these five places came to be known as the five Kedaras ( Panch Kedars); the head of the bull appeared at the location of Rudranath.

Kedarnath in the form of Lingham is of an irregular shape with a pedestal 3.6 m (12 ft) in circumference and 3.6 m (12 ft) in height. There is a small pillared hall in front of the temple, that has images of Parvathi and the five Pandava princes. There are five temples around namely Badari-kear, Madhya Maheswara, Tunganatha, Rudranatha, and Kallesvara. The first hall inside Kedarnath Temple contains statues of the five Pandava brothers, Lord Krishna, Nandi, the vehicle of Shiva and Virabhadra, one of the guards of Shiva. Statue of Draupadi and other deities are also installed in the main hall. An unusual feature of the temple is the head of a man carved in the triangular stone fascia. Such a head is seen carved in another temple nearby constructed on the site where the marriage of Shiva and Parvathi was held. Adi Shankara was believed to have revived this temple, along with Badrinath and other temples of Uttarakhand; he is believed to have attained Mahasamadhi at Kedarnath. Behind the temple is the samadhi mandir of Adi Shankara.

The temple is one of the four major sites in India’s Chota Char Dham pilgrimage of Northern Himalayas. This temple is the highest among the 12 Jyotirlingas. The temple is not directly accessible by road and has to be reached by 16 kilometres (9.9 mi) uphill trek from Gaurikund. Due to extreme weather conditions, the temple is open to the general public only between April (Akshaya Tritiya) and November (Kartik Purnima, the autumn full moon). The grand and impressive structure of Lord Shiva’s shrine is made of grey stone. Steep climb stretching to 14 km from Gauri Kund brims with the abundant beauty of nature. The paved and steep path gifts the pilgrims the fantastic views of snowy-peaks, alpine meadows and delightful forests of rhododendrons. A large stone statue of Nandi Bull stares at the shrine, guarding it, sitting right opposite it.

The month of April marks the beginning of the summer season in Uttarakhand. It is the time of the year when the ice melts and with the help of the army, the roads are cleared for the commencement of pilgrimage from April end. The average temperature in Kedarnath during summer ranges from 2℃ to 19℃. Mid-June marks the commencement of the monsoon season in Kedarnath. Even though the temperature touches the mark of 19℃, heavy rains keep it a tad difficult for trekking. Though it has to be noted with right gears and guidance, you can still trek to Kedarnath in monsoon season. The surroundings of Kedarnath Temple that imbibe the charm and divine aura of the shrine have spectacular attractions on offer. While sightseeing makes the most of the activities around Kedarnath, there is a fair chance of paying homage to other sacred temples and relishing adrenaline-filled trekking expeditions as well.

This year, the Kedarnath temple has been decorated with 10 quintals of flowers that were donated by an NGO based in Rishikesh, Mohan Lal Thapliyal, chairperson of the Badrinath-Kedarnath Temple Committee told IANS.

There is one Garbha Griha which houses the primary idol (pyramid-shaped rock) of Lord Shiva. The temple has withstood natural calamities like avalanches, earthquakes, and floods for over a thousand years and still stands as strong and elegant as it must have originally been.

Between June 13 and 17 again, the state of Uttarakhand had received an unusual amount of rainfall. This led to the melting of the Chorabari glacier and the eruption of the Mandakini river. The floods affected large parts of Uttarakhand, Himachal Pradesh, and Western Nepal. The heavy rainfall caused massive flash floods and landslides resulting in the death of residents and tourists as well as extensive damage to property. Kedarnath, the temple and town, also bore the brunt of nature’s fury, but the shrine survived. Some say a massive boulder blocked the path of the water and saved the temple from being washed away.

In 2013, the temple town was badly damaged during the Kedarnath floods which wreaked havoc across Uttarakhand. The floods were triggered by heavy rain and a breach of a massive glacial lake that was situated just above Kedarnath. The heavy rainfall caused massive flash and flood landslides resulting in the death of residents and tourists as well as extensive damage to property. Reportedly the worst hit was the Kedarnath valley popular for the 8th-century temple dedicated to Lord Shiva. The flood left behind a death toll of more than 5000

No one is ever left behind with the mesmerizing beauty of KedarnathTemple and it’s extravaganza form of nature portrayal so does this brings the Prime Minister of India, Narendra Modi who performed puja at Kedarnath on 18th May 2019 after spending the night meditating for 17 hours in a cave near the holy shrine

“It is my honour that I have continuously got the opportunity to visit this place of spiritual consciousness for many years now, and the development mission that I have for this place includes nature, environment and efforts,” PM Modi