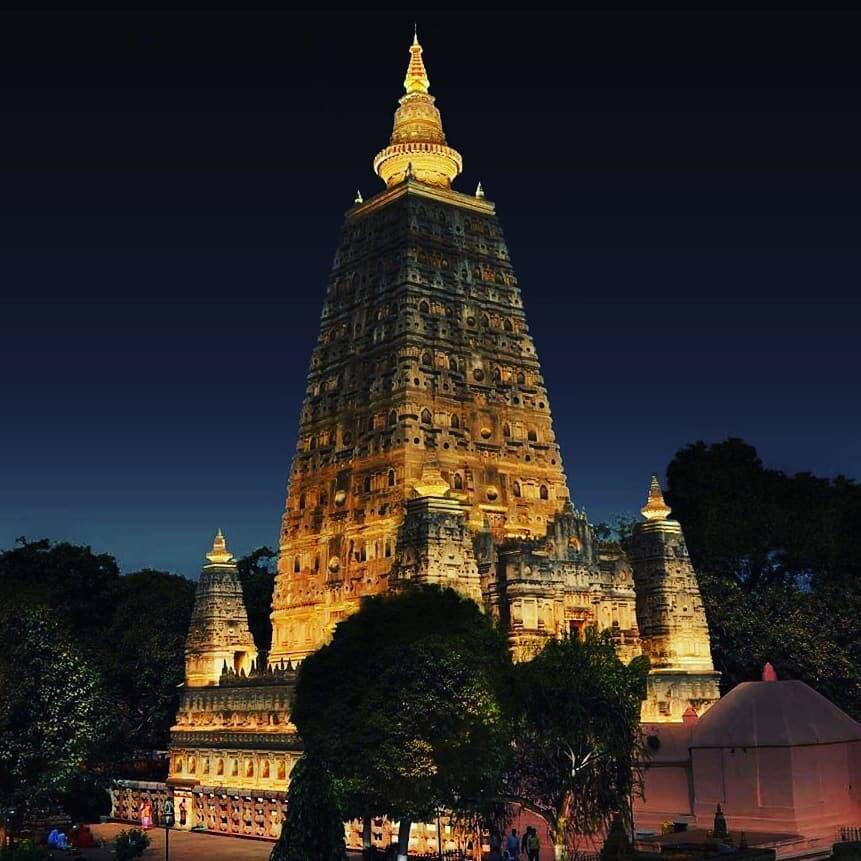 An ancient Buddhist temple, the Mahabodhi Temple reflects through its walls, the story of the man who had walked into the realm of the truth through his deep meditation, enlightened the world with wisdom, and transformed himself into “Lord Buddha”. The place where Buddha gained enlightenment resides in the lap of Bodhgaya, in the Gaya district of Bihar. Since June 2002, the temple is recognized as a UNESCO World Heritage Site. For Hindus and Buddhists all over the world, the temple is a major pilgrimage destination. Let me take you to the destination through my words and tell you some interesting Mahabodhi Temple facts in detail.

Three things cannot be hidden: the sun, the moon, and the truth

When was Mahabodhi Built? (a journey that began with the establishment of Buddhism by Lord Buddha)

The Mahabodhi Temple history has its roots embedded in Buddhism, one of the oldest and most venerated religions of India.  Buddhism is a clear, profound set of beliefs, which appeals to people even today because of the simplicity and hope of its outlook. It was patronized by several dynasties in ancient India, most notably so by King Ashoka.  According to Buddhist texts, it was established by Prince Siddhartha, a young man of privileged birth and pure ideals. In order to protect him, his childhood was sheltered and his education conventionally styled. In adulthood, the knowledge of life’s many tragedies such as old age, disease and death shook him so much that he renounced his material life and turned to asceticism, thereby transforming from the cosseted prince Siddhartha to Gautama Buddha.

Lost in deliberation and exhausted by his search for the greater good, he came to rest under a peepal tree near the site of the modern Indian city of Gaya, on the banks of the Phalgu River. After meditating at that spot for three days, he attained the enlightenment he sought. The tree later came to be known as the Bodhi tree.

The Mahabodhi Temple was built at this spot, which according to Buddhist scriptures, is the navel of the earth.

The temple was built around 7thcentury C.E, though restoration and rebuilding work was carried out in various other centuries as well.

Who built Mahabodhi Temple? (A dive into architectural skills of ancient India)

The Mahabodhi Temple architecture is unique and of a refreshingly unadorned splendor. Most of the ancient structure was made of bricks, which makes it one of the oldest surviving brick structures. UNESCO credits the Gupta period for the grandeur of the bricks forming the structure.

The Mahabodhi temple is covered with designs of honeysuckle vines and flying geese, as well as depictions of Buddha’s life.

The central tower of the Mahabodhi Temple renovated in the 19th century stands 55 meters high. The tower is surrounded by four other small towers. The stone railings surrounding the temple from all four sides have heights of 2 meters. The railings are composed of two different materials, the older ones are made of sandstone, and the others made of granites that were added much later. In those railings, one finds the images of the Hindu goddess Laxmi bathed by elephants and the Surya riding a chariot.

The Mahabodhi temple complex has six important sites, and another, the Lotus pond, outside it. There are two shikhara towers in the complex. The shikhara towers are known to influence Buddhist architecture in other countries as well.

While talking about the architecture of the Mahabodhi temple, one must remember that the temple in its present form is not a result of just one period but a mixture of architectural styles of various historical periods of India.

The Diamond seat in the Mahabodhi temple, or the Vajrasana, was built by Emperor Ashoka in the 3rd century to commemorate the place where Budhha had meditated. Ashoka constructed the seat under the Bodhi tree, where Buddha gained enlightenment. It is carved out of red sandstone and is etched with delicate carvings of lotuses.

The structure of railings of the Mahabodhi temple resembles those of the Sunga period, though many of them had been dismantled and kept in museums.

The prayer hall of the Mahabodhi temple is another important place, where Buddha is believed to have spent a week, in prayer.

According to legend,  Buddha walked along a certain path in the Mahabodhi temple complex, which led bright cerise lotuses to spring up as he walked. The area is known as the Rantaparichrama or Jewel walk. Stone lotuses have been erected here to mark his steps.

There are several engraved balustrades and stupas throughout the complex, which depict scenes of Buddha meditating, or answering the questions of Brahmins. The original columns have been removed to a museum for preservation and replicas have been installed. The stupas are also a mixture of styles, having been built by various kings and dynasties over different periods of time.

The disparity in the styles, along with all the other elements, however, emphasizes the grace and magnificence of the structure, as a whole, portraying the unique yet age-old idea of harmony and peace through divine teachings and the eternal message of peace and nonviolence which Buddha spent his life propagating, can be felt intently in the atmosphere.

The Mahabodhi Temple built to the east of the Bodhi tree is said to be the direct descendant of the original Bodhi tree. This spot is called the navel of the earth as no other place can bear the weight of the wisdom that Buddha attained here, according to Jatakas. The Buddhist tradition even claims that, on the doomsday, at the end of the Kalpa, this spot called Bodhimana will be the last site to disappear and also the first to appear the world reborn. According to legends, a lotus blooming at this very spot will be seen and if a Buddha will be born during the new the Kalpa, the lotus too will rise in accordance with the number of Buddhas, similarly as the Bodhi tree sprang up the day Gautama Buddha was born.

King Ashoka is a famous character from India’s history, brought to life by modern retellings of his battles. According to legend, King Ashoka was a battle-hardened and violence driven king, who would wage destructive battles to conquer new territories. After a particularly gruesome battle at Kalinga, Ashoka was overcome with remorse at the amount of carnage and violence, which he felt victory could not compensate for. He renounced violence entirely and embraced Buddhism and started to propagate it.

Influenced by Lord Buddha and his ideas, he went to Bodhgaya almost 200 years after Buddha attained enlightenment, where he established a monastery. Though the Mahabodhi temple went through many reconstructions, Ashoka is still credited for much of its modern structure.

The decline of the Mahabodhi temple

With the decline of dynasties patronizing Buddhism, the religion itself saw a decline in the spread of its ideas, following Huna and the early Arab Islamic invasions. The revival that it showed during the period of Palas between the 8th and 12th centuries was temporary, and Buddhism saw a decline all again following the defeat of the Palas by the Sena dynasty.  Bodh Gaya being invaded by the Muslim Turks during the 12th century CE, the Mahabodhi Temple was left in a ruined state.

Restoration of the Mahabodhi temple

The work of restoration of the temple was begun by the British colonial government in the 1880s under the leadership of Sir Alexander Cunningham and Joseph David Beglar. The main Buddha image removed at an earlier stage following the Muslim Turks’ invasion was restored in the Mahabodhi Temple during this period. Since then, it is being repaired and devotionally worshiped in the sanctum.

Mucalinda lake, a peaceful spot in the Mahabodhi temple

According to legends, four weeks after Buddha began meditation under the Bodhi tree, the heaven itself darkened for seven days leading to a staggering rain. Miraculously, the king of serpents Mucalinda came from beneath the lake to protect Buddha with the umbrella of his hood. When the storm cleared, Mucalinda being divinely influenced by the determination of Buddha bowed before him showing his reverence and returned to his place. Hence, the lake there is named after the king of serpents as “Mucalinda Lake”. The lake is also known as the Lotus spot and it continues to be one the most beautiful sites around the main complex.

Since the independence of India, the Mahabodhi temple Bodhgaya is being protected and managed by the Bihar state government. The Bodhgaya Temple Management Committee and an advisory board share the responsibility. The member of the committee must consist of four Hindu and four Buddhist representatives and the committee serves for a three-year term. The Gaya district magistrate is the chairman of the committee according to the Bodhgaya Temple Management Act, 2013. The Advisory Board consists of the governor of Bihar and 25 other members.

A site of wisdom and enlightenment, Mahabodhi temple in Bihar is indeed India’s pride.

Having gone through the detailed Mahabodhi temple information, from “where is Mahabodhi temple” to “the essence that the temple wears”, you must visit the site to see the lively version of the words and to receive a drop of Buddha’s ocean of enlightenment.