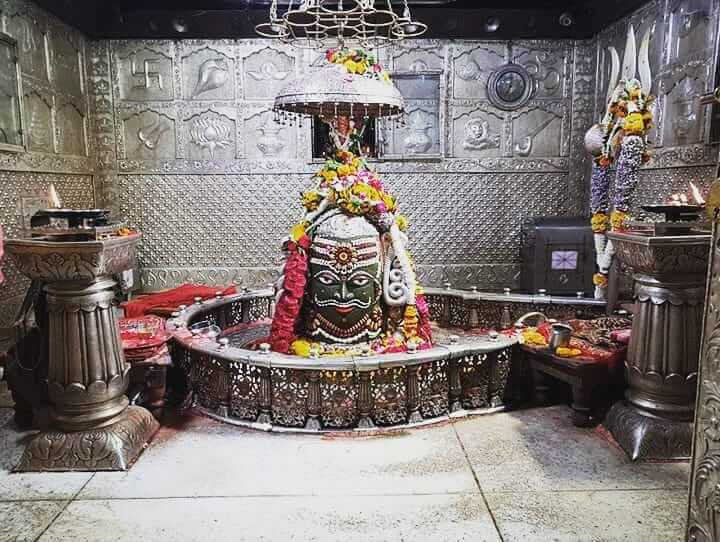 Mahakaleshwar Temple, established in the ancient town of Ujjain in Madhya Pradesh, remains to be one of the holiest and leading areas of pilgrimage for Hindus. The abode of Lord Shiva, it is on the banks of the Rudra Sagar Lake and is one of the twelve Jyotirlingas. Even in the modern and hectic lifestyles, the temple continues to provide visitors with an altogether different and unmatched peace of mind and composure.

The Mahakaleshwar Temple has a spacious courtyard with sculptural finery and elegance that is inspired by Maratha, Bhumija and Chalukya styles of architectural pattern and is finished with extraordinary lingam figures of Mahakaleshwar.

The temple has five levels in total, one of them is underground. The colossal idol of Mahakaleshwar is located below the ground level (Garbhagriha) and is a Dakshina-murti, which means that it is facing the south direction. This unique feature is found only in the Mahakaleshwar Temple from amongst all the twelve Jyotirlingas.

The magnificent temple has the lingams of Nagachandresvara and Omkaresvara placed in the central and topmost parts respectively. The idol of Nagachandresvara is open for darshan to the general public only on the occasion of Nag Panchami. A large Kunda, known as Koti Tirtha, can also be found in the compound and is considered to be celestial. To the east of this Kunda lies a huge veranda, which is the entrance to the path leading to the Garbhagrha, where small-sized images of Ganesha, Kartikeya, and Parvati can also be found. The silver-plate that blankets the rooftop of the Garbhagra adds to the beauty of the shrine. Classical eulogies in praise of Lord Shiva are exhibited all around the walls. The images of Sri Rama and goddess Avantika are worshipped in a cell on the northern side of the veranda.

All rituals, including Puja-Archana and Abhishekaarati, are regularly performed in the temple all year round. The main festivals celebrated here are:

The sacred procession of the Almighty passes through the streets of Ujjain on every Monday for some particular periods. The last Sawari that takes place on the dark fortnight of the Bhadrapada especially draws the attention of lakhs of people and is celebrated with great pomp and show. The procession during the Vijayadashami festival is equally exciting and attractive.

The Bhasm Aarti that takes place in the Mahakaleshwar Temple daily is a prime attraction. The Aarti commences each day before dawn breaks. During this religious ritual, the idol of the Lord is worshipped with sacred ash brought from the ghats, and the ash is then applied to the lingam before conducting the holy prayers. The temple at Mahakaleshwar is the only Jyotirlinga temple where this Aarti is performed.

The tickets for the booking of this Aarti are available online, and you need to apply a day in advance. The applications are accepted only till 12:30 PM, following which the list is declared at 7:00 PM.

It is strongly recommended to stay in at the temple itself, or a nearby hotel so that you get a chance to witness the mesmerizing Bhasm-Aarti and make the best out of your devotional trip. If there is a lot of crowd in the temple, you can purchase a VIP Pass. It will cost you INR 250 per head and will save you from a lot of queues. Carry along your photo-ID Proof. Women and men need to necessarily dress up in a saree and dhoti/sola respectively during the Bhasma-Aarti.

The Mahakaleshwar temple is located close to the holy river Shipra. The supervising deity, Lord Shiva in the lingam form is considered to be Swayambhu, deriving currents of power from inside against the other images and lingams that are ritually installed and bought with mantra-shakti.

Lord Shiva, in all his glory, rules eternally in the city of Ujjain. The Mahakaleshwar temple, its Shikhar towering into the sky, an impressive façade against the horizon, evokes primordial awe and reverence with its majesty. The Mahakal controls the life of the town and its people, even throughout the hectic cycle of contemporary preoccupations, and gives an indestructible bond with ancient Hindu customs.

On the festival of Maha Shivaratri, a large fair is held near the temple, and prayer continues throughout the night.

The shrine is revered as one of the 18 Maha Shakti Peetham. Shakti Peethas are considered to have blessed with the presence of Shakti due to the falling of body parts of the corpse of Sati Devi when Lord Shiva moved it. Each of the 51 Shakti Peethas has shrines for Shakti and Kalabhairava. The Upper Lip of Sati Devi is said to have fallen there and the Shakti is called Mahakali.

According to the Puranas, the city of Ujjain was called Avantika and was famous for its beauty and its status as a devotional epicenter. It was one of the prime centers where students moved to study sacred manuscripts. According to the legend, Chandrasena, a ruler of Ujjain was a religious believer of Lord Shiva and idolized him entire time. One day, a farmer’s son named Shrikhar was wandering in the area of the castle and overheard the King chant the Lord’s name and hurried to the temple to begin praying with him. But, the guards dismissed him by strength and threw him to the outskirts of the city near the river Kshipra. Opponents of Ujjain, King Ripudamana and King Singhaditya of the nearby kingdoms decided to invade the Kingdom and take over its reserves around this time.

Discovering this, Shrikhar began to pray and the news reached a priest named Vridhi. He was astounded to hear this and upon the instant pleas of his sons, started to pray to Lord Shiva at the river Kshipra. The Kings decided to attack and were victorious with the aid of the mighty demon Dushan, who was blessed by Lord Brahma to be invisible, they looted the city and attacked all the believers of Lord Shiva. Hearing the appeals of His helpless devotees, Lord Shiva arrived in his Mahakala figure and killed the opponents of King Chandrasena. Lord Shiva agreed to reside in the city upon the request of his followers Shrikhar and Vridhi and become the main idol of the Kingdom and take care of it against its opponents and to defend all His followers. From that day on, Lord Shiva resided in His light form as Mahakala in a Lingam that was formed on its own from the powers of the Lord and His consort, Parvati. The Lord also blessed his followers and claimed that people who worshipped Him in this form would be freed from the fear of death and illness. Also, they would be granted worldly treasures and be under the protection of the Lord himself.

Bharthari was the elder son of King Gandharva Sena and inherited the kingdom of Ujjain from the heavenly god Indra and the King of Dhara.

When Bharthari was king of ‘Ujjayani’, modern-day Ujjain in his state there existed a Brahman who after years of self-discipline was granted the fruit of immortality from the divine tree of Kalpavriksha. The Brahman offered the same to his ruler Raja Bharthari, who in turn, gave it on to his love, the beautiful Pinglah Rani or Ananga Sena Raja Bhartrhari’s last and youngest wife. The queen, being in love with Mahipaala, the Head police officer of the state gave the fruit to him, who further passed it on to his precious, Lakha, one of the maids of honor. Ultimately, Lakha being in love with the king offered the fruit back to the king. Having completed the circle, the fruit exposed the downsides of betrayal to the king, he commanded the queen and ordered her beheading, and had the fruit himself. After that, he abandoned the throne and became a religious tramp.

He later became a follower of Pattinatthar who initially indulged in a dispute about samsari and sanyasi with king Bhartrhari. Later during the conversation, pattinathar said that all women have a ‘dual mind’ and it might be the true case even with Parameswari. King conveyed this news to Rani Pingalah and she ordered Pattinathar to get punished and to sit in Kalu Maram. They tried to kill Pattinathar, but Kalu Maram began to burn and nothing happened to Pattinathar, the king came to know this message and went immediately to Pattinathar and asked him to prepare to die the next day, but Pattinathar replied, ” I’m ready right now, to die”. The next day king appeared with tears in his eyes and released saint from prison because he truly noticed Queen Pingalah in love with horsemen that night, He threw away his empire, wealth, even full coat dress and dressed in a simple kovanam (loincloth), the king became a disciple of Pattinatthar and got mukthi (salvation) in Kalahasthi temple.

Kalidasa, the great Sanskrit poet of the times during the regime of king Vikramāditya belonging to the Gupta period, has mentioned about the rituals of the temple in his works in Meghadūta. He mentions the Nada-Aradhana, the performance of art and dance during the evening rituals.

The temple complex was destroyed by Sultan Shams-ud-din Iltutmish during his raid of Ujjain. The Jyotirlingam was ruined and assumed to be thrown into a nearby ‘Kotiteerth Kunda’, a pond neighboring the temple with the Jaladhari looted while the invasion.

The existing structure was created by the Maratha general Ranoji Shinde in 1734 CE. Further developments and management were done by other members of his dynasty, including Mahadji Shinde and Daulat Rao Shinde’s wife Baiza Bai. During the reign of Jayajirao Shinde (until 1886), major programs of the then Gwalior State used to be held at this temple.

After Independence, the Dev Sthan Trust was replaced by the municipal corporation of Ujjain. Nowadays it is under the collectorate office of Ujjain district.

When you visit Mahakaleshwar do keep in mind the history and beauty of this place.