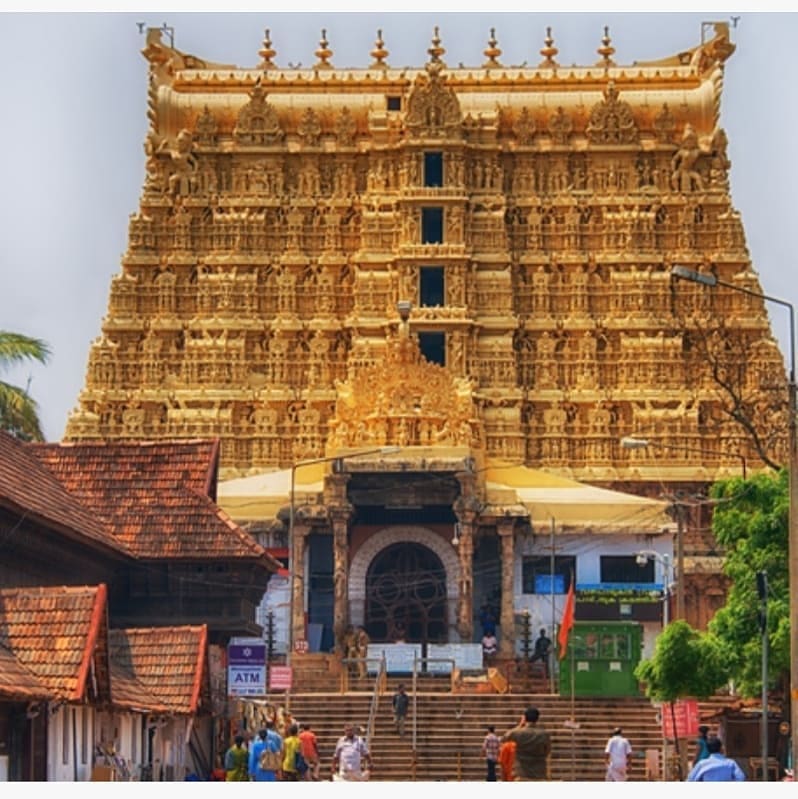 India has held the world in fascination due to its rich history, an abundance of gold, spices and cloth not to mention the description given by foreigners as a land of exotic mysteries. Its myths and beliefs often overlap giving rise to tangible forms, but isn’t it what makes the Indian culture so enthralling! The famous Padmanabhaswamy temple mystery proves the famous quote “Truth is stranger than fiction”.

The temple has survived the ravages of time- stood through political uprisings, and natural disasters as an awe-inspiring testament to the wonders of devotion. It is wreathed in mysteries when it comes to its origin and the source of its fabulous wealth. It is also one of the oldest temples in India having existed over three centuries.

The temple is located in Thiruvananthapuram, Kerala. In Malayalam, it means ‘The City of Lord Ananta’, or Maha Vishnu, the principal deity of the temple. The current standing structure is thought to be from the 16th century. However, many ancient texts refer to it as pieces of Sangam literature, Bhagavad Purana and the Mahabharata.

Extracts from these texts reveal that the temple was already shrouded in mystery even then, and was incredibly prosperous beyond imagination. A great poet of the time claimed in his lyrics that its walls were made out of solid gold. It is one of the prime centres of worship for Vaishnavites- the sect in Hinduism which regards Vishnu as the Supreme God.

The Padmanabhaswamy temple history tells us about its origin that a sage residing near the Ananthapuram Temple, prayed to Lord Vishnu with great devotion. Vishnu visited him in the guise of a mischievous boy, who defiled the sage’s idol.  Enraged, the sage drove the boy away.  Through his senses which were heightened by penance, he understood that the boy was God himself, and begged forgiveness. Vishnu commanded him to come to the forests of Anathavana.

When the sage reached there, the god visited him in the form of a great idol of Vishnu leaning on his celestial hooded serpent, Adisheshnag. A temple was built by the royal family, under the direction of the sage, at that very spot.

Another legend states that Parshurama, an incarnation of Vishnu, sanctified the idol.

The Temple has strong links to the political history in Kerala as well. In the eighteenth century, after the ascend of Anizam Thriulam to the throne of the royal house of Travancore, the temple was renovated under the orders of the new king. Soon after, Anizam Thriluam surrendered the throne symbolically to Lord Padmanabhaswamy, declaring that he and his family would only be the caretakers and vassals.

In his fervent devotion, he also decreed that the names of the royal family members would be prefaced with the title “Servant of Lord Padmanabhaswamy”.

Architecture of the Temple

The architecture of the temple is a mix of that unique to indigenous Kerala and Dravidian styles. Inside the garbhagriha or inner sanctum, an idol of Lord Padmanabha resting on his celestial eight-hooded snake Adishehsnag is placed. One of the creators from the Holy Trinity, Lord Brahma, emerges from a lotus through God’s navel.

He is flanked by his consorts, Lakshmi, the goddess of wealth and prosperity, also called Sridevi, and the earth goddess. The idol is coated in an ayurvedic paste to keep it clean. Statues of other goddesses holding divine weapons are also placed there.

The temple complex also boasts of another shrine which predates the Padmanabhaswamy temple, Thiruvumbadi, dedicated to Parthasarathi- the divine charioteer of Arjuna. Temples dedicated to Rama, Sita, Ganesh and Hanuman are also found within the complex.

Another feature of interest is the clock tower, called Methan Mani constructed in the 1840s to celebrate the successful resistance to Tipu Sultan’s invasion of Travancore. The clock is made out of the polished mahogany and has a quaint charm to it.

Temple vaults- Treasures of the World

The source of the intrigue around the temple is its underground vaults. As per official sources, there are six vaults under the temple, named A-F.

All the vaults, with the exception of the second, have been opened to make an inventory of the contents. The members of the team dealing with the inventory were astonished beyond comprehension by the glittering magnificence within.

There was a three and half feet pure gold statue of the deity, studded with flawless, shimmering gems. A pure gold coconut shell set with emeralds of an impossible size and sheen was also discovered. Several Napoleon era coins were found along with Roman gold coins, apparently indicating the system of trade in the earlier centuries.

Other reports also mention a gold throne meant for a 18 feet long deity. Thousands of golden chairs, around 1200 thick gold chains with rubies and emeralds are some of the few sources of astonishment. It is estimated that the value of the monumental items are close to ₹1.2 lakh crore or ₹1.2 trillion (US$17 billion), even without taking the antique value into account.

The valuables are believed to have accumulated as donations to the deity by various empires such as Cheras, Pandyas, Pallavas and Cholas amongst many others. The government has ordered the vaults to be resealed after the inventory. Even without considering the unrevealed contents of the Nilavara vault, the value of the treasure surpasses that of the British crown jewels and the entire GDP of the Mughal Empire at its prime. Thus, the answer to the Padmanabhaswamy temple mystery lies behind the exception of vault B, which hasn’t been cracked through yet.

The Padmanabhaswamy temple sealed door, also known as the Padmanabhaswamy temple vault B, remains till date a mystery. Archaeologists surmise that it has never been opened since the 1880s. A number of myths and legends have sprung up about the Nilavara vault. The carvings of snakes on the door have led people to believe that the snake god guards the treasure against all human intrusion.

It is also said, that when Parshurama consecrated the idol, a number of holy men came to him and asked him to give them a place to stay where they could worship the deity in peace. He created this vault for them and they thought to be divine beings are believed to be still in there. Having made it their mission to protect the treasure from the rapacious nature of human desire.

There are rumors that the government has found another two vaults, which are yet to be opened. The temple is indeed, a mystery for curious adventurers and a wonder of faith for the believers.

Is Padmanabhaswamy temple the richest temple in India?

Yes, along with the Padmanabhaswamy temple mystery which is rich with anecdotes and well-thought rumours it also stands on the top of interminable fortune. The internet has a lot to share regarding history and gold to be found in the temple. But, the aura of devotion and divinity that permeates the temple can be known only to a truly devout, who is unmoved by all the gold and glinting diamonds.

An eerie hesitation runs down one’s throat when trying to fathom the amount of wealth the temple is known for. 17 billion US dollars is something enough to buy not a ‘nation’ but nations. Thus, after reworking on the answer to the above question we come to know that along with ranking on the chart of top 10 richest temples in India, it also ranks as the richest temple in the world.

What happened to the temple treasure?

Recent reports as covered by the media, and as per the enquiry of the supreme court of India declare that about 189 crores worth of gold has gone missing from the temple complex. Along with gold, eight diamonds of the rarest kind that once adorned an idol of the temple have also disappeared into thin air. These disappearances in such large amounts are clear indications of theft combined with inefficient management by the administrative authority of the temple.

Chances are high that the plunder of the Padmanabhaswamy temple wealth has been done by the royal family of Travancore, along with those involved within the temple complex. Though there is no proof, and no substantial investigation has taken root on this matter but the Supreme Court is on its way to take a decisive stance in accord with the hearings and the reports.

We all are now aware of the vault B, the dark mystery and legends that are thought to exist behind its doors. Some say a curse is bound to befall over the whole of India, if the doors are burst through arbitrarily or by any other means which excludes the power of devotion to the infinite. Whether cobras or doomsday in the form of a tsunami, efforts to open the vault in the past have only led to sheer failures, followed by irrevocable disasters.

The carvings of snakes on the door have led people to believe that the snake god guards the treasure against all human intrusion.

Another legend says that about a century ago, people tried to open the vault during a famine, but they stopped when the sound of rushing water was heard from within. The story goes that of the vault is opened, a flood will wipe out the city.

It is also said, that when Parshurama consecrated the idol, a number of holy men came to him and asked him to give them a place to stay where they could worship the deity in peace, he created the vault for them, and that being divine beings, they are still in there, protecting the treasure from human greed.

There are rumours that the government has found another two vaults, which are yet to be opened. The temple is true, a mystery for the prosaic minded and a wonder of faith for the believers.