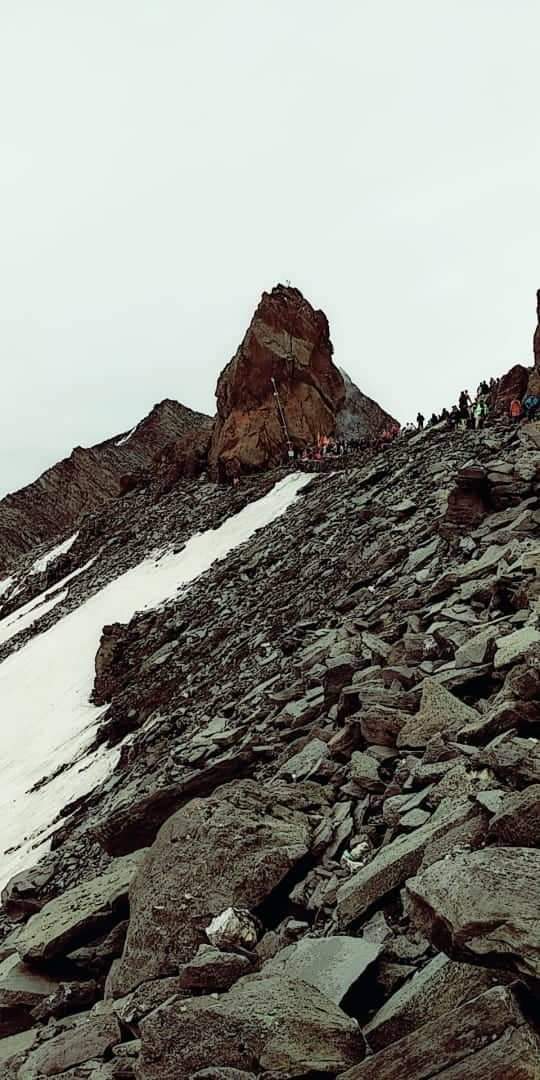 The Shrikhand Mahadev trek is considered as one of the most difficult treks to do, but nothing can diminish the faith of a true Shiva Bhakt. Shrikhand Mahadev is a 72ft high fragmented Shivling. Each year, this holy place is officially open during Sawan Mas. Every year, the Shrikhand Mahadev Yatra begins in July for 15 to 20 days. This year, the Shrikhand Mahadev Yatra started on July 15th and ended on 31st July. Jathas or groups leave for the Yatra after their complete medical examination is conducted by the Trust and they are declared fit to take a trek to about 38 km. It is surely a challenging trek but once you are in the holy place and the Lord Shiva himself calls you to visit Him. There is nothing that can prevent you from traveling forth to the Shrikhand Mahadev Peak. Lord Shiva himself gives its devotees the courage to reach up to Him. It is indeed an enriching experience one remembers for a lifetime.
In 2014, the journey has maintained by administrators. The online registration process has not started yet. The registration is done at the Base Camp Singhad accompanying the medical checkup of each devotee in ₹150.
Shrikhand Kailash Mahadev is a religious journey. This place is linked to Lord Shiva and is one of the five Kailash. The devotees reach there by trekking on the very hard route which is 5140m from the sea level. Lord Shiva is established here in the form of fragmented ‘Shivling’. On the right-hand side of this mountain, there is ‘Kinnar Kailash’ and on the left direction, this mountain is connected with ‘Great Himalayan National Park’. It is fascinating to know that Shrikhand Mahadev can be reached in 6 different routes.

The mythology of Shrikhand Mahadev is that the Devil Bhasmasur asked for a boon from Lord Shiva that whatever he keeps his hand on, that will be converted into Ashes. After getting the boon, Bhasampur became egoistic. Consequently, Bhasampur thought to place his hand on Lord Shiva. Lord Shiva arrived Srikhand by entering the Devdhakkha cave in Nirmand place and was renovated as Shrikhand Shila. To shield Lord Shiva, Lord Vishnu disguised himself as Mohini to stop Bhasmasur’s plan. She persuaded Bhasmasur to dance with him. While the dance, Bhasmasur placed his hand on his head and was turned into Ashes. After the death of Bhasmasur, Lord Shiva tried but could not get out of Shilakhandi rock, then Ganesh, Karthikeyan and Maa Parvati arrived at this place, then Mahadev came out after destroying the rock.
Two main tracks have been utilized largely to reach Shrikhand Mahadev, but some travelers are aware of the third way. But the truth is that Shrikhand Mahadev can be reached from 6 various routes, which are:

This is the simplest route to reach Shrikhand Mahadev. People who are seen the vision of Shrikhand through this path know how easy it is, but if you compare it with other paths, then it is the only way you can feel comfortable. This journey starts from Jao village the distance of Shreekhand Mahadevis approximately 25.5 km. On this route of journey offline registration of each passenger is done in Sinhgad. Tourists get assistance in the journey, such as search and rescue, medical aid, district police and free boarding and lodging in several places. Due to the narrow path, and the constant climbing, mules, and horses are not available on this route yet. On this track, you can visit several temples like Nirvana Shiva cave, Parashuram temple, seven temples in Nirand, Nine gods including Mata Parvati in Jao, Hanuman temple.

With 5373 m altitudes, the distance of this path is around 18 km. Ganavi village is established on the mouth of this valley, due to which this valley is also named ‘Ganavi Valley’ in the regional dialect. The jury is 1381 m above from the sea level and is found on this journey and begins from here. Direct climbing and ice make this route extremely tough. On this path to reach Shreekhand, there is no amenity other than the cottages, which makes it further hard. After jury, Fancha is the first spot in this journey where lodging amenities are accessible. This site is about 15 km from Jury. The distance from Shrikhand to Fancha is approximately 18 km. When you arrive at Bhima Bahi, there is a sharp climb and the pilgrims have to face standing glaciers also. Due to the ice ahead of this place, travelers may have to face the problem in finding the way. Walking on this route is a good test for shoes.

Reaching Shrikhand Mahadev from Banjar-Badahad is considerably easier than another two routes. This route has also been used primarily by locals. There is no information of any kind on the internet about this route. Keep in mind that there is no facility of any kind on this path, so passengers will have to take the tents, sleeping bags and food items themselves, as well as locals, can also help you in this matter if they are available. Badahad village is located at a height of 2050 m from the sea level. This is where the journey begins. The first stop of this journey comes at the origin of the river Falacha, where the temple of GodFalach is also located. The second day the journey begins early in the morning. This day starts with a sharp climb, under which after walking 2-3 km the altitude increase to 650 m. On the next day, devotees instantly visit Bhim Dauri and visit Lord Mahadev.

The fourth round to reach Shrikhand Mahadev proceeds from Gushyeni. This track is one of the dangerous tracks. The dangers of this route can be estimated from the fact that this path leads you directly to the base of the Kartik Swami Mountains which is 5100 m high. From Kartik Swami, the track raises the ‘Vimti Passenger’ from the back of Shrikhand Mountain. By this route, Shreekhand Mahadev will not be a journey but a mountain campaign. There is a good road worth traveling by Vehicle until Gusheni. Gusheni route leads along with the ‘Tirthan river’ flowing in ‘Tirthan valley’. The route reaches the crossing of many villages where the Tirthan river takes the form of a bayalag glacier. This track is also a section of the ‘Great Himalayan National Park’ and the Tirthan Valley. There are 11 hidden lakes on the glacier beyond ‘Baniyag’.

Another route is situated between Nirmand and Jury by which the Shreekhand Mahadev can be reached. The fifth route to reach the place of Shrikhand Mahadev leaves Jhakdi which is 1181 m from sea level. According to locals, this path is even more challenging than Fancha road. So it is advisable not to travel through this route.

The sixth route to reach Shrikhand Mahadev starts from Kheeraganga. Over time, this route has been buried under the glaciers. There is not much information available about this route.

The total distance from Shimla to Shrikhand Mahadev Peak is around 72 Km. Danda Chadai starts from Thachru to Kali Ghati, a 3 km trek. After this trek, pilgrims reach Kali Ghati and from Kali Ghati, Yatra will go to Bheem Talai and later to Kunsha valley. Then pilgrims will arrive at Bheem Dwar which is 8 km away from Kali Ghati. It is said that Bheem Dwar is the place where Pandu Putra Bheem made stairs to heaven which he could not complete in time. The rocks and big stones are arranged in a vertical position and something is written on these rocks which are fondly called Bheem Lipi.
From Bheem Dwar, the next stop is 4 km away called Parvati Bagh. As the name suggests, this place is full of rare Himalayan flowers. Parvati Bagh also contains the beautiful and rarest flower, Brahma Kamal, which is also considered to be Mata Parvati’s favorite flower.
As you climb up, you will have to cross glaciers, etc. and then comes the Nain Sarovar Lake which is 3 km from Parvati Bagh. Nain Sarovar is a small lake/Sarovar which emerged from the tears of Mata Parvati who was waiting for Lord Shiva, but He took so long to arrive from the mountain top that Mata Parvati broke down and with her tears was made the Nain Sarovar Lake. This lake has frozen mountains and glaciers around it.

The next and last step of this Yatra, the Shrikhand Mahadev peak can be noticed from the Parvati Bagh and Nain Sarovar Lake, if the climate is not hazy. After a trek of about 6 to 7 km, one can have the darshan of Shrikhand Mahadev peak, the abode of Lord Shiva. At this place the pilgrims can feel that their life is fulfilled, it is so divine. After having a proper darshan of Lord Shiva, pilgrims will have to trek down to Parvati Bagh the same day to have some rest at the camping site.
The entire expense or complete package of Shrikhand Mahadev Trek will be approximately ₹15,000 to ₹17,000 including accommodation and meals. However, this package may vary from agency to agency. The cost will also depend upon the number of people going to a Jatha (group).

One must carry the following essential things before starting with the Shrikhand Mahadev Yatra, which is considered more difficult than the Amarnath Yatra.

• A woolen sleeping bag
• Good quality trekking shoes
• Sleeping mats
• A sweat protector backpack with its rain cover
• Medicines such as cetirizine, ibuprofen, Ciprofloxacin, etc.
• A small first aid box containing band-aids, cotton, and an antibiotic cream
• Thermal wear and quick dry half sleeved t-shirts
• 2-3 pairs of socks and comfortable clothes
• Extra Phone batteries
• Rehydration packets
• Headlamp or torch
• Some packaged food items such as nuts and dry fruits, but don’t overstuff your bag with food items
The trek would probably be the toughest. But, with the chants of Har Har Mahadev, Jai Bhole plus the satisfaction of reaching till here will make this difficult trek an easy and fulfilling one.