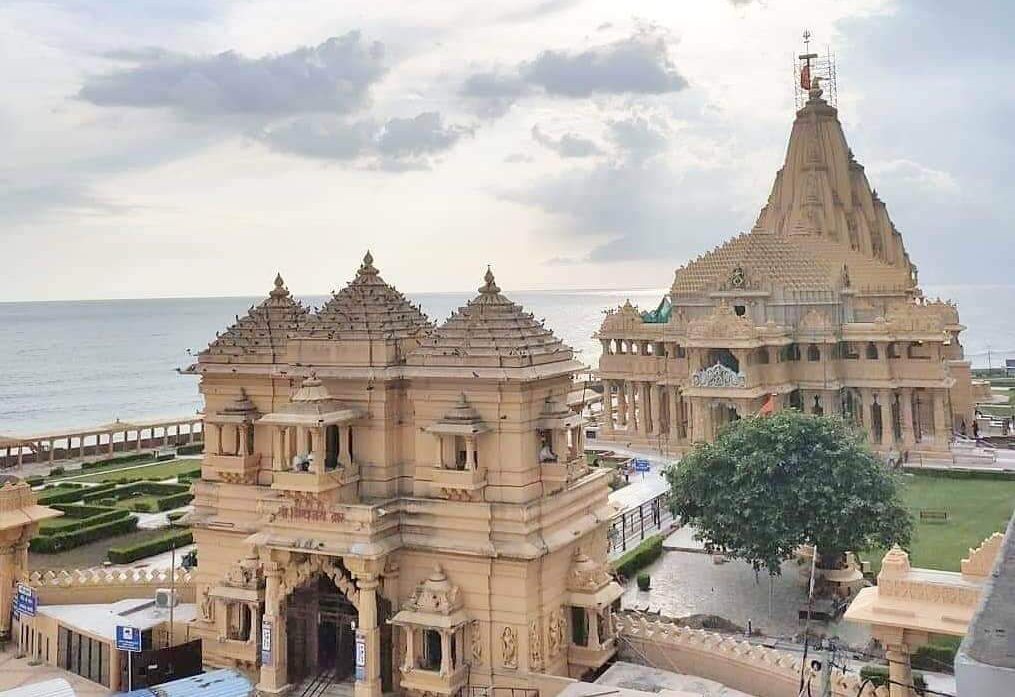 Where is Somnath Temple?

Somnath Temple is located on the western coast of Gujarat, in Prabhas Patan near Veraval. It is a famous Tourist spot and pilgrimage of Gujarat. The temple is located at such a place that there is no straight-line land between Somnath seashore till Antarctica continent. In a Sanskrit inscription, found on the Arrow-Pillar called Baan-Stambh is noted that the Somnath temple stands at a point at an Indian piece of land, which happens to be the first point in the north to the south-pole on that distinct longitude.

The Somnath temple was destroyed completely many times in the past. The answer to” how many times the Somnath temple was destroyed” might surprise you. In 1025 AD, Mahmud Ghajini looted this temple. Then the temple was distorted by Afzal Khan, the commander of Ala-Ud-Din Khilji, and then Aurangzeb. In total, 17 times the Somnath Temple was disturbed. The present temple was reconstructed in the Chaulukya style of Hindu temple architecture and displays the skill of the Sompura Salats, one of Gujarat’s master masons. The Somnath Temple reconstruction was finished in May 1951.

The reformation of the temple was started under the orders of the first Home Minister of India, Sardar Vallabhbhai Patel, and completed after his death. Today the Somnath temple trust is responsible for the upkeep of the historic monument.

Somnath Temple is one of the 12 jyotirlingas in India, and this is where Lord Shiva happens to have appeared as a fiery column of light. Each of the 12 jyotirlinga sites is named differently according to the manifestation of Shiva. At the Somnath temple site, the primary image is a lingam representing the beginning-less and endless stambha, symbolizing the infinite nature of Shiva.

The first Shiva temple at Somnath built in the past is unknown. It is said that it was Yadava kings of Vallabhi who built the Somnath temple around 649 CE. In 725 CE, Al-Junayd, the Arab governor of Sindh destroyed the second temple as a part of his invasions of Gujarat and Rajasthan. The Gurjara-Pratihara king Nagabhata II constructed the third temple in 815 CE, with red sandstone. The Somnath Temple was renovated with gems and stones but it was repeatedly destroyed by Muslim Invaders. They looted the temples, made Hindus hostage, broke the jyotirlinga despite the plea of Brahmins not to destroy it.

Somnath Temple’s history has had its share of looting and plunderers. Ghazni is said to have taken almost 20 million dinars from the vaults. As per the historical record, the damage to the temple was sparse because there are records of voyages to the Somnath Temple, which has no mention of damage. But insistence is that Ghazni murdered 40,000
devotees who were there inside the temple. The Somnath Temple attack went down in the pages of history as cold-blooded and gruesome.

Due to various legends connected to it, the temple is considered sacred. The Somnath Temple History mentions a close relationship of Somnath with the release of Chandra, the moon god from the curse of his father law Daksha Prajapati. Legend says that the moon was married to the 27 daughters of Daksha Prajapati. He was partial to Rohini, his beloved, and neglected the others. The raged Daksha cursed him to wane into nothing. Chandra reached at Prabhasa with Rohini and pleaded the Sparsa Linga of Somnath after which he was adored by Shiva to rise and shine in the bright half. Because the moon regained his light here, the town came to be known as Prabhasa.

The architecture of Somnath Temple

In 1546, the Portuguese, based in Goa, raided ports and towns in Gujarat including Somnath, and destroyed numerous temples and mosques. The temple was rebuilt every time with the reconstructive spirit of the Hindu worshipers.

The temple’s Sikhara, or main spire, is 15 meters in height, and it has an 8.2-meter tall flagpole at the top. The Somnath temple’s architecture includes complex carvings, silver doors, an extraordinary Nandi idol, and in the center is Shivalinga. In the spacious courtyard stand the massive mandapa or hall, as well as the main shrine. The place where the Somnath temple is situated has no land in a straight line, between Somnath seashore until Antarctica. On the walls of the temple, the statues of Lord Brahma, Shiva and Vishnu are made. The flag on the peak of Somnath Temple is 38 feet long and it changes 3 times per day. The temple was rebuilt because of the spirit of the Hindu worshipers. The Somnath Temple is an important tourist spot.

According to belief, when the invaders came to destroy the Shivlinga, the linga was assumed to be safely hidden within its hollow witness, the notable Syamanthaka Mani. The stone related to Lord Krishna. The stone created an attractive space around, that kept the Somnath Shivlinga floating above the ground. lt was reclining in the air so that no one can touch the lingas.

The present Somnath Temple was built in 5 years under the orders of the then President of India Dr. Rajendra Prasad in 1947. According to records, the site of Somnath has been an exploration site from historical times as it was said to be the junction of three rivers, Kapila, Hiran, and the mythical Saraswati. The meeting point was called Triveni Sangam and is believed to be the place where Moon-god bathed. The Somnath temple is related to the moon god and curse of his father-in-law Daksha Prajapati. Non-Hindus don’t require any special permission to visit Somnath Temple. The decision was taken in because of people’s security. The temple is mentioned in sacred texts of Hindus like Shreemad Bhagavat, Skandpuran, Shivpuran, and Rig-Veda. This signifies as to what the importance of Somnath temple is. According to the facts of Somnath temple, the name of Somnath Temple will change when the world is rebuilt. This means that when Lord Brahma will formulate a new world after the ending of the world we are living in, Somnath will be named Pranath Temple. According to another citation in Skanda Purana, there are about 6 Brahmas. This is called Satannand.

The old Somnath temple (Ahilyabai Temple) is built opposite the new Somnath temple. Ahilyabai Temple is painted in pink color which witnesses the colour full history of the land. During the 17th century the temple came under the rule of Marathas. It is believed that Abilyabai Holkar was stridden by the destructive statue of the temple and decided to rebuild the Temple. The location of the temple came in her dream. The speculation has been rife as to where the original Somnath Shivling is. Many Hindu Mythologies speculate that the temple contains the original jyotirlinga which was buried so that the original temple never raid. Unlike the new Somnath Temple, everyone is allowed at the temple. Even aarti with musical instruments is conducted there.

Many famous personalities have quoted about the charisma of Somnath Temple. Somnath Temple is a representation of the rich cultural heritage in India. The description of this ancient temple has been made in ‘Rig Veda’ of Hindu origin. The term Somnath implies ‘the protector of Moon God’. Lord Shiva is portrayed in the form of a Jyotirlinga, as the protector of Moon God. The Somnath temple, Gujarat, is termed as ‘the Shrine Eternal’ because the temple has shattered more than five times and every time, it has been reconstructed.

September to March is called the best time to plan your Somnath temple darshan and this is the time when we can find a huge crowd in the city and if someone is not the one liking crowd then plan their tour in the monsoon or summer months .lf you are in planning to visit Somnath in the summer season then do carry an umbrella and always. One is bound to visit the temple both old and new Somnath Temple once in a lifetime. Now pack your bag and start your wonderful trip to The Somnath temple, Gujarat.