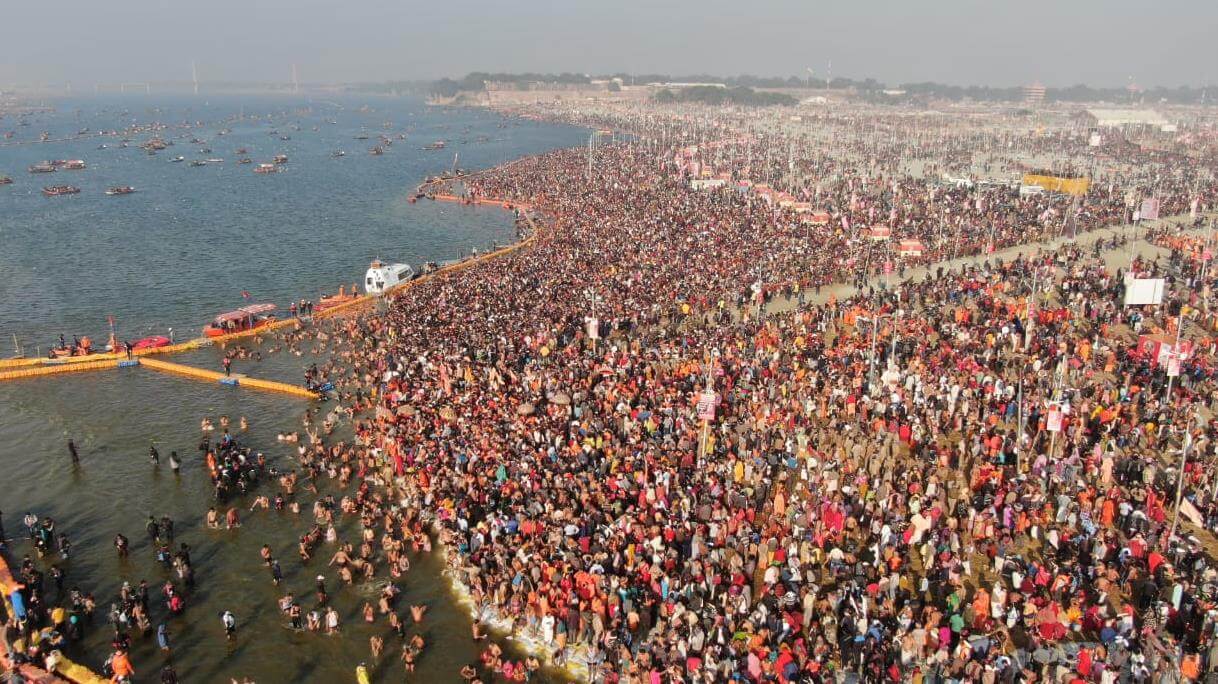 Pilgrimage is a journey that takes place across the world, and many people see it as the holiest form of dedication to religion. In Indian culture and tradition, there are many journeys a person can take, but none are as far-reaching as the Kumbh Mela. It is the largest gathering of faith in the world. Now, to give a crisp answer to where Kumbh Mela is held? It is at the shores of the sacred rivers that flow through the veins of mother India.

The main rituals culminate in Prayagraj in the state of Uttar Pradesh, where Kumbh Mela is seen as a grand opportunity to commune with the divine. The spirit of togetherness and devotion that is integral to the Indian culture; is what marks the importance of Kumbh Mela.  It seems the place where Kumbh Mela is celebrated quite unambiguously draws tens of millions of visitors from around the globe.

Do you know why Kumbh Mela is celebrated?

The Kumbh Mela is celebrated four times over the course of twelve years, these twelve years in Kumbh Mela History denotes the fight between gods and demons. As per the Hindu mythology, there are water bodies that are considered holy, and taking a bath in them washes away one’s sins of the past.

The Kumbh Mela travels from the Ganges through the Shipra and Godavari, before finally emerging in Prayagraj. Prayagraj is where the rivers of the Ganges, Yamuna and Saraswati meet. The pilgrimage is considered life-changing by many. It is reflected in its diverse attendees- saints, hermits, and the common man- all who are a part of the Sanathan Dharma.

The locations where Kumbh Mela is held has gained prominence, along with acquiring an important part of the Indian tradition. Thus, a purpose that can’t remain unfulfilled. The significance of the Kumbh Mela goes deep and has mythological and astrological explanations. Our Indian culture explains the meaning of Kumbh as the flow of humanity towards enlightenment, and a confluence (or Sangam) of all the cultures in the universe.

As clear as crystal is the fact that the meaning of Kumbh Mela has universal application. Life’s troubles can be put to ease when you are surrounded by millions of others serving the same cause as you. The Kumbh Mela history involves the fight over the ‘nectar of immortality’.

In the pages of the Indian culture, gods and demons conflicted for aeons over this treasure. After Lord Vishnu secured the nectar, a few drops of it fell on four sacred rivers and these are the places where Kumbh Mela is celebrated- the same rivers in which devotees’ bath during the Mela.

Where Kumbh Mela is held also depends on what constellation the Jupiter enters to make sure that the universe is at its holiest. At the Kumbh Mela, there is no doubt that the stars will be in your favour! The Indian customs followed at the Kumbh Mela include a wide variety. There is an ‘aarti’ or prayer taking place at the banks of the rivers, and a ‘snan’ or a bathing ritual will rejuvenate a person as if blessed by the divine.

‘Deep Daan’ will remind you of a scene from the movie ‘Tangled’. In this ritual, people go about lighting beautiful lights in specific locations. The most important ritual is the ‘Triveni Sangam’-praying at the confluence of the Ganges, Yamuna and Saraswati. All of these rituals act as a dedication to Indian culture and heritage and help in keeping people connected to their identities.

In Indian history, it was during the reign of King Harshvardhana, when Kumbh Mela got widespread recognition outside India. The King used to hold festivities at Prayagraj and distribute his possessions among the masses. Indian culture and heritage also state that the Prajapati Bramha performed an important ritual at Prayagraj where Kumbh Mela is organized with the utmost zeal.

Do you know that Kumbh Mela is visible from space?

Yes, you read it right. Kumbh Mela at Allahabad was visible in satellite images from space.

There is no doubt that the Kumbh Mela is a large event with dedicated attendees. It has received global coverage from international media, bringing the Indian history and culture in the spotlight. Kumbh Mela from space is viewed by people all over the world. The year 2013 recorded a staggering 120 million pilgrims attending and the number will only keep increasing.

To fully experience Indian customs, there is no better experience than that of Kumbh Mela.

In addition, you’ll get in touch with your spiritual self and remind yourself of the things that matter. The importance of Kumbh Mela lies in its significance that is to wash away the bad and welcome the good. This is something every person needs to start anew. As the saying goes, “Discover Kumbh. Discover India. Discover yourself”.

Sadhus, naked or decked in robes proliferate the shores with the name of Hari all over their tongues.  Past, in myriad colours, shines in front of their closed eyes, composed of their deeds both good and bad. They concentrate and deliberate their minds on their bad deeds, for salvation comes only after the expiration of bad karma.

The sun shimmers gold on the gentle waves of the river, in whose waters they submerge themselves. The cool-tantalizing touch soon washes away those decadent colours of their sinful past. Thus, the divine sun reflects on their eyes, smile and skin. Smeared with ash, starved to the brink, swathed in the wind and smoke, lost all love and belonging yet not a sign of complaint.

Hari, Mahadev, Bhagwane, Shakti- the synonyms have no end but, all minds no matter how unique focused on the one sublime. Some of the fascinating Kumbh Mela facts consist of the embark of the Kumbh that is directly connected to the planetary motion and positioning. This indicates that the Kumbh is one with the universe, and no mere customary, religious or just for the sake of its event.

People from all corners of the land travel through great pains to attend this Mela. Whether a middle-class man, businessman or nobody- all are embraced the same by the river, and effulgent sun.

Class and caste, successful or unsuccessful, nothing remains of significance, only prayer, cleansing and revelation. The rigid walls of karma accumulated since the endless past through evil deeds, words and thoughts crumble in-between the surreal sky and ceaseless river. Such is the time of Kumbh; salvation through the atonement.

The eye-opening importance of Kumbh Mela is the belief in the endless cycle of birth and death. This cycle central to the Sanathan Dharma is experienced in the form of meditation, incantation, and ritualism. The nectar of immortality, whose drops carried by the four sacred rivers, through the four different places- where Kumbh Mela is celebrated.

Nagas- naked and impervious to the elements, prying eyes of disgust, abuse and censure cavort in rhythm with the beat of the universe resonant with the beat of their atman. Covered in ash, fearless in the face of the inevitable death ‘Kumbh’ is the time for them to bear the fruit of their endless austerities.

Many like the Nagas known as Urdhwavahurs, Parivajakas, Kalpvasis and Shirashasins now manifest their austerities for the world to see. Thorns, needles and blood it seems are of no consequence to them, for life was never limited to this decaying body made of sperm and blood.

During the time of the Mela, riches and fame are left behind as it is one’s karma that remains eternally attached to one’s atman beyond lifetimes. So, where Kumbh Mela comes to life there is paved a path of spiritual pursuit to identify oneself with the eternal, endless, timeless and infinite universe.