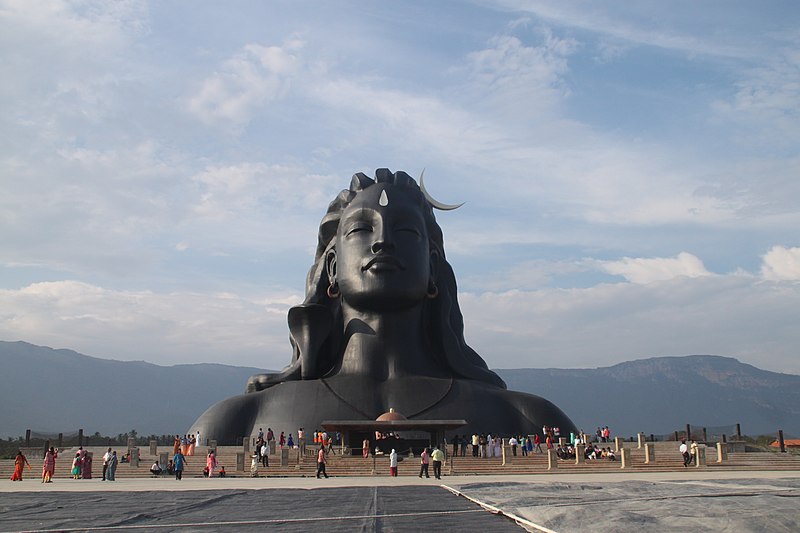 Lord Shiva is the immortal vital force who is not constrained to title, form and time. He is known to be the supreme power in the Hindu religion.  In the story behind the Adiyogi Shiva statue, the great ‘Yogi’ is seen completely absorbed in profound meditation – the transcendental reality. Yoga is a spiritual discipline supported by a particularly subtle science, which aims towards bringing harmony between intellect and body.

One who encounters or experiences this unity of existence is said to have mastered yoga and is depicted as a yogi.

Do you know who is Adiyogi?

In brief, when we look at the history of Adiyogi, Shiva is represented as the first yogi and the first Guru or Adi guru who propagated the merits of yoga. Yogeshwara or ‘Great Lord of Yoga’ is the representation of divine meditation and spirituality.

Not only Adiyogi, but Shiva is also represented as Nataraj, the God of dance. Read more about the Shiva Nataraj

Meaning of Yoga and its significance

The word ‘Yoga’ is derived from the Sanskrit word ‘Yuj’, which means ‘to join’ or ‘to yoke’ or ‘to unite’. As per yogic scriptures, the practice of Yoga enables a person to be in union with individual consciousness and Universal Consciousness, indicating a perfect equilibrium of the Mind and body.

Thus, the aim of Yoga is Self-realization, which leads to the state of ‘liberation’ (Moksha) or ‘freedom’ (Kaivalya). Yoga works on these four broad classifications:

By applying these classifications we can connect to the inner core of our being. In human life- health and harmony are the main objectives which can be attained through Yoga practice. Yoga is the attainment of the perfect union of mind, body and soul. This perfect union is what ultimately leads to mastery.

History of Adiyogi- the first Yogi

Lord Shiva is considered as Adiyogi- from whose divinity Yoga took birth. He is the indispensable guru among the yogis, and the first to instruct the science behind Yoga. ‘Adiyogi Shiva statue’ story uncovers that self of Shiva who is meditating within the mountains of Kailash in silence, positioning himself in the shape of a lotus. His mental and yogic energies are heightened to the level of realizing the very workings of the universe.

Adiyogi history narrates of a tale of Shiva who bestowed his knowledge on Yoga and meditation to his spouse Parvati. On the night when Lord Shiva for the first time shared the secrets of Yoga to his spouse, he was at that moment hailed as the Adi Guru of Yoga.

Adiyogi history reveals Shiva teaching Parvati 84 Asanas of Yoga which belong to the Vedic parampara. These 84 Asanas have the power to deliver the individual towards Rajyoga which is the ‘Goal of yoga’. These Yogic positions eradicate the doshas in a person’s life and lead to the most favourable outcomes.

The eternal love Shiva had for his spouse Parvati was so strong that he never felt like sharing his Yogic insights with anybody else but her. However, Goddess Parvati who stands as a symbol of care and affection could not take in the sufferings of the people and considered it her duty to share these insights with them.

According to Adiyogi history, the second set of yogic teachings were conveyed to the Sapta Rishis or the first seven sages. His instructions were then exchanged to these sages on the banks of Kanti Sarovar, near Kedarnath.

Why is Lord Shiva known as Adiguru?

In the Indian culture and convention, knowledge and instructions are exchanged through the lineage of teacher-disciple called as ‘Guru Shishya Parampara’. The unceasing wellspring of knowledge flowed from the Supreme Godhead or master represented as Lord Shiva. Adiyogi history clarifies that Shiva first conveyed to Parvati (Shiva’s spouse) and after that to the seven sages called Sapta Rishis.

These seven sages travelled wide and far all over the world to different regions to spread the divine knowledge to the entire of humankind. Subsequently, Adiyogi being the first Teacher in the universe, also known as the Adi Guru.

The supreme knowledge or the incomparable information is essential to know about the Universal Self (Paramatma) or what we call as God. The human being is the most elevated form of creation since we are given the control of knowing his existence, not at all like other living creatures of the world. It is said that the Sat, Chit, Ananda – Truth, Awareness, and Bliss are the properties of the Supreme Self.

In this journey, the Supreme Energy known as Shiva assists man through the Gurus that he has trained. Thus, in Adiyogi history the eternal wisdom flows from the Adiguru through the seven sages and their successors to the whole of humankind.

Adiyogi Shiva statue – the world’s largest sculpture in the world

Adiyogi Shiva statue is considered as the world’s largest statue that depicts the Hindu deity, Shiva, which is made up of 500 tons of steel. It was recognized by the Guinness book of world records. For designing the statue, it took almost 2.5 years, and the face of Shiva, which is made of small pieces of metal put together is a first-of-its-kind.

Location of the temple and Adiyogi statue history

Adiyogi temple is surrounded by greenery farms, coconut groves, and the Velliangiri hills. 112 feet statue stands tall in Coimbatore, India which celebrates the history of Adiyogi statue and Shiva as the origin of yoga. Shiva is popular in many forms across the land but depicting the deity as the ‘first Yogi’ is not common.

The height of 112 feet Adiyogi symbolizes the 112 methods to obtain freedom—or moksha—a theme in yogic culture. It is also said the height represents the 112 chakras; points of focus in the body used in meditation.

In Adiyogi Shiva history, he appears to be seated in the lotus pose (padmasan) in a meditative and reflective posture that reflects supreme bliss. His body is spread with holy cinder which shows the passing nature of the universe. He wears a crescent moon that symbolizes wisdom and mystic knowledge.

The three eyes tell us that he is the Master of the past, present and future, being the pioneer of sun, moon and fire. The snake coiled around his neck is a sign of his vitality or the Shiva principle implanted in each human being. The Ganges streaming from his tangled hair stands for interminable and perpetual purity.

Do you know when and where the Adiyogi statue was unveiled?

On the auspicious night of Mahashivaratri in the year 2017 at Isha Yoga Center, an iconic face of Adiyogi was unveiled by the Honorable Prime Minister Narendra Modi. A towering 112 feet high, this remarkable and glorious face represents the 112 ways one can attain to one’s ultimate nature.

Adiyogi statue was placed near the Yogeshwar Linga, which was consecrated by Sadhguru, as a manifestation of five of the major chakras in the human body. Adiyogi temple with the presence of the Yogeshwar Linga has become a living entity.

Sadhguru has written a book about Lord Shiva called as “Adiyogi-the source of yoga” which best explains about Adiyogi meaning, history and its significance. Sadhguru quotes,

“Adiyogi is here to liberate you from disease, discomfort and poverty-above all, from the very process of life and death”

This might interest you-Physical, Mental, and Spiritual health benefits of Yoga

Adiyogi statue is made of steel

Adiyogi statue is made of steel, it is not just for aesthetics but also has its geometric significance. It was made by a unique way of crafting a metal statue

It took about 2.5 years to design the face of Adiyogi and to construct it as an iconic structure took another eight months

The remarkable grand structure of Adiyogi is estimated to weigh around 500 tons!

The reason behind the number 112-foot Adiyogi statue

The number of 112 feet statue represents Adiyogi who opened up 112 possibilities for human beings to reach their ultimate potential. There is also scientific importance —that there are 112 chakras in the human system, to explore 112 elements of life.

We can see in Adiyogi history that Lord Shiva as the first yogi – the originator of yoga. He was the one who put this seed into the human intellect and started yoga which makes a difference in us to attain harmony between intellect and body.

The most prevalent posture of Lord Shiva is the posture of Adiyogi in contemplation. He is unceasingly engaged in the state of Samadhi or Nischala (without any movements). Shiva is an entity beyond the temporal physical presence. To form a happy and serene world, humankind must know that genuine prosperity can only be found inside, and they must be propelled and enabled with the fundamental tools to turn inwards.

Travelling through the process of Yoga, a spiritual aspirant creates the two critical qualities specifically Viraga (determination) and Vairagya (detachment). He is engaged with his internal self, travelling towards interminable bliss or Ananda.

Therefore, Lord Shiva is the encapsulation of Yoga and the term Adiyogi embodies assimilation or the state of flawlessness which perfectly applies to Him.