Story of Bhangarh Fort – the haunted fort in Rajasthan 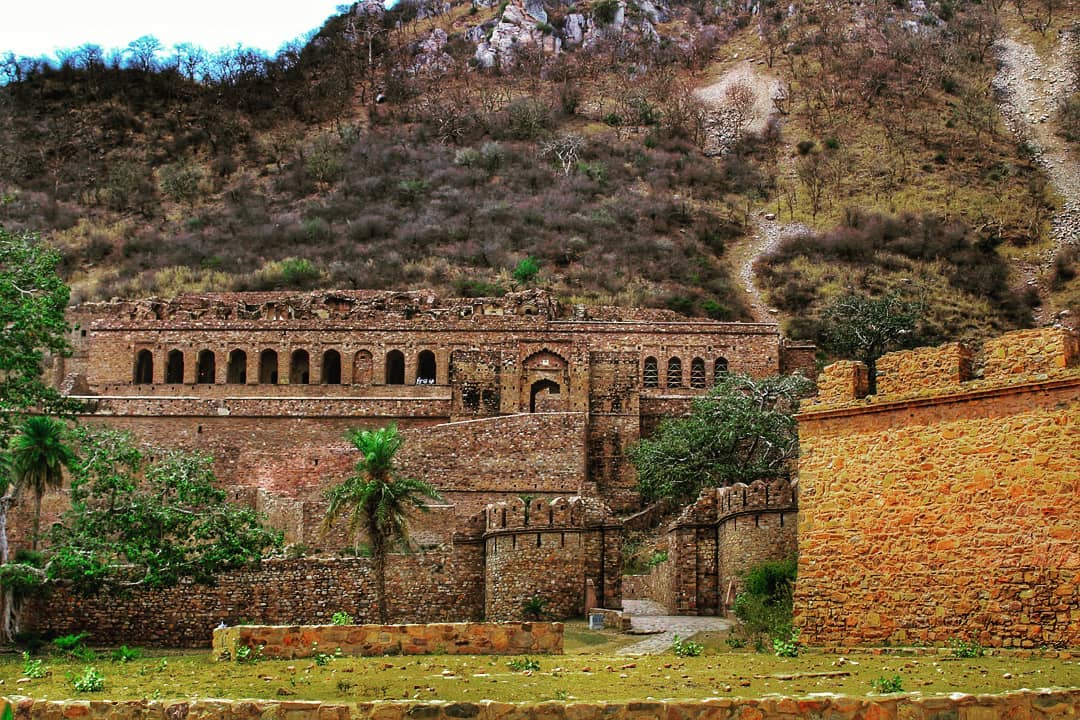 The story of Bhangarh fort is ambiguous in every aspect. The Bhangarh fort history is tinged with horror and mystery.  There are a number of legends connected with Bhangarh Fort’s overnight desolation. Stories might change but the experiences of people visiting one of the most haunted forts in India sound almost the same. One is not allowed to stay in Bhangarh Fort at night, to be precise before sunrise and after sunset.

Where is Bhangarh fort?

The Bhangarh fort was built during the 17th century by the Kachwaha leader of Amber, Raja Bhagwant Singh. It was built for his younger offspring, Madho Singh. Madho Singh’s grandson Ajab Singh is known to have built the fort of Ajabgarh. The Bhangarh fort history has to its credit many acclaimed rulers like them.

The Bhangarh Fort is located in the range of Aravali Hills in the Alwar district of Rajasthan, on the border of the Sariska Reserve. The nearest village is Gola ka Baas. Standing on a slanted area at the bottom of the hills, a favourite sobriquet for the historic fort is ‘horror fort’. The ruins of the King’s palace are found in the lower portion of the hills.

It is deemed as one of the most haunted places in the world. Bhangarh fort’s haunted stories are bone-chilling yet fascinating all at the same time. Bhangarh Fort is famous for its haunted tales that resound across the walls of the fort. Tourists claim to have observed ominous apparitions along with the eerie sound of music and restless anklets bursting across the city and fortress.

Due to this reason, no one dares to visit this place after sunset. It is also believed that people who have visited the fort in the night have never returned. Hence, as per the Government of India after the dusk falls, none is allowed to enter the historic place, and a signboard has also been erected by the authorities making one aware of the same.

What is there to see inside the horror fort in Rajasthan?

The fort is 235 kilometres from the capital, Delhi and the entrance to the Bhangarh Fort in the last 2-kilometre stretch is unpaved and coarse. The fort is 32 km from Thana Ghazi. The closest airport is Jaipur International Airport which is 88.2 km from the fort.

While entering via the main gate of the completely ravaged fort city, one can spot temples, palaces, and Havelis. Also, there are four other gates to enter the fort – the Lahori Gate, the Ajmeri Gate, the Phulbari Gate, and the Delhi Gate.

The Bhangarh fort history is associated with a lot of famous temples. At the main gate, there are several Hindu temples such as Gopinath Temple, Hanuman Temple, Keshav Rai Temple, Someshwar Temple, Ganesh Temple, Mangla Devi Temple, and Navin Temple. The home of the priest, called the Purohitji Ki Haveli, is seen on the boundaries of the temple complex.

Alongside is the Nachan Ki Haveli (dancer’s palace) and Jauhari Bazar (market place), followed by the Gopinath Temple. The Royal Palace is built at the edge of the fort’s boundaries.

Widely regarded as one of the most haunted forts in India, all for the right reasons, of course, there are quite a lot of stories adding to the aura of mystery. One of them goes like this. The locals believe that there was this beautiful princess Ratnavati, who was the daughter of Chatr Singh. She was the jewel of Rajasthan. Tales of her charm and charisma spread like wildfire throughout the four quarters of the land, thus countless dreamed of her as their wife.

A Tantrik priest well versed in black magic fell in love with her. But, knowing that she was way out of his league, he attempted to cast a spell on her. He bewitched a perfume that was purchased by one of her maids in the hope that its use will make Ratnavati fall in love with him. Princess Ratnavati came to know of this mischief, and as a result, gave orders to get him killed.

It was dropped on a rock and it got attracted to the Tantrik. He was smashed under its heavy load, but before he died, he cursed the princess, her family, and the entire Bhangarh. The next year, a battle was fought between Bhangarh and Ajabgarh, which led to the demise of Ratnavati and most of the army. Due to the curse, the fort remains doomed even today.

There is another story of Bhangarh Fort. There was a sadhu named Guru Balu Nath who lived at the top of the hill, on whose foothills Raja Bhagwant Singh constructed the fort. His only requirement for permitting the Bhangarh Fort to be built there was that it should never cast a shadow on his little abode.

This condition was honoured by all except Ajab Singh, who added columns to the fort that cast a shadow on the ascetic’s house. The angry sadhu’s curse led to eternal devastation of the fort and the surrounding villages. A tiny rock hut, known as Tantrik ki chhatri overlooks the fortress.

The temples dedicated to Hanuman and Shiv Mahadev are built in the style of cenotaphs rather than temples. Jhiri marble has been used in its construction. A tomb outside the entrance of the fort is said to belong to one of the sons of King Hari Singh. Shrouded in mystery, the Bhangarh fort’s real story still remains a cause of major speculation even today.

The best time to visit the Bhangarh fort is between September and February since like other cities of Rajasthan; the area is scorching during the summers. The Bhangarh fort history is known for its blood-chilling eerie tales. Hence it is prohibited to the public between 6 pm to 6 am as per the ASI’s directions. The entrance of Bhangarh is closed between sunset and sunrise.

No vehicles are allowed to access the fort beyond a specific point. Failure to this instruction can lead to severe legal prosecutions.

Visitors claim to have heard piercing yelps, the restlessness of bangles that indicate the presence of a woman, loud cries, and distinct smells that engulf the place after nightfall. These are the words of the many brave yet foolish. The Bhangarh fort’s ghost story is on the tip of everyone’s tongues, especially among the locals. Haunted or not, the truth is that many people have committed suicide or have died unnaturally in the confines of the fort.

One such Bhangarh fort incident is about two young boys, who decided to spend the night at the fort but never returned. Similar to this unfortunate incident, another boy chose to visit the fort after sunset and fell in a well found at the centre of the fort.

Although he was rescued immediately by his friends while he was being taken to the hospital, the car met a terrible accident and all the three died on the spot. The Bhangarh fort history is rich in these kinds of incidents.

But, in sheer contrast to all these mishaps, the local guards denied having ever seen anything that can be termed paranormal.

One is bound to experience an adventure of a lifetime, if that individual steps forth inside the wrecked walls of Bhangarh after the moon has ascended the sky, becoming the only source of hope and light amidst the dark past that still lives on in Bhangarh. The Bhangarh fort mystery remains, till date, in the dark waiting to be unravelled!