Caste system in India and Manusmriti 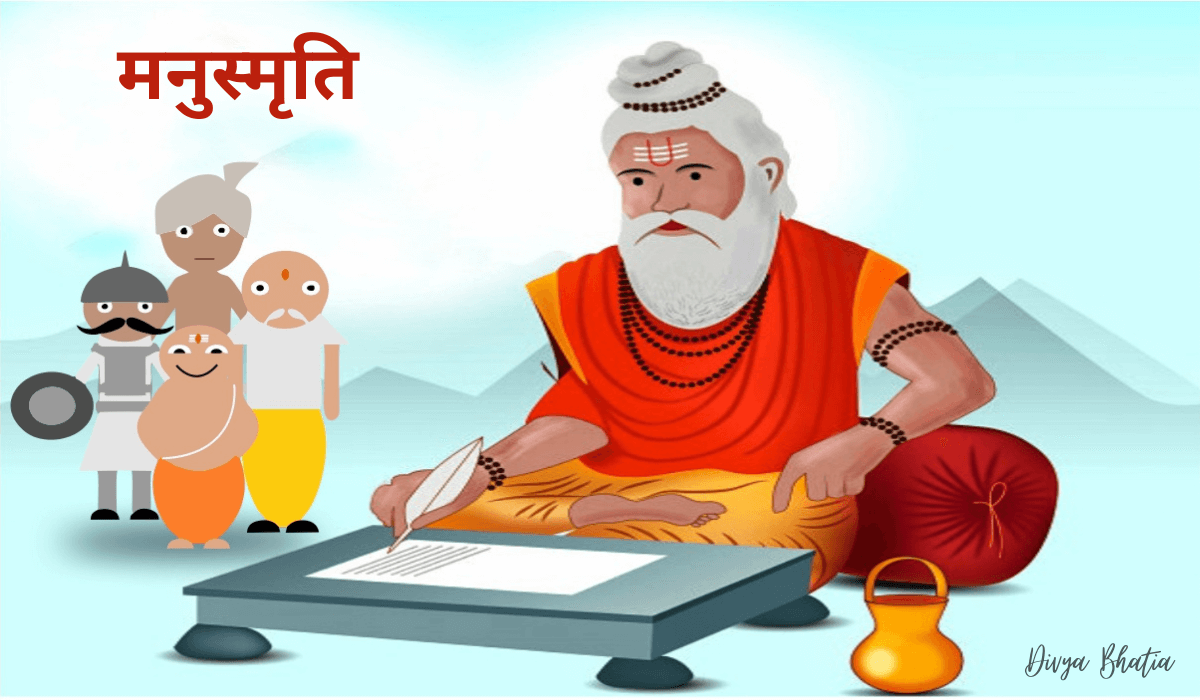 From where did the word ‘caste’ derive?

The Spanish-Portuguese word ‘casta’ which meant race, breed, or lineage gave birth to the modern word ‘caste’ & it was first used by the British in the 1700s to signify the Hindu hierarchy of social communities. It was a part of their divide & rule policy because India has always been the land that focuses on union & believes in unity. Surprisingly enough, as we can see, Hinduism or the Indian culture did not have the caste system specifically, what they had was the Varna System.

What exactly is the Varna System?

The word ‘Varna’ had come from ‘Vri’ which signifies the choice of one’s occupation & the Sanskrit word ‘Varna’ means color.

The explanation of this Varna system from the religious aspect derives from the Rig-Vedic hymn & Purushashukta defining how the varnas were created from the creator’s mouth, arms, thighs & feet respectively. Here’s the Shloka that defines the above :

Purusha Sooktam 13 / Rigved 10.7.90.13 — The Brahmana (spiritual wisdom and splendor) was His mouth; the Kshatriya (administrative and military prowess) His arms became. His thighs were the Vaisya (commercial and business enterprise); of His feet, the Sudra (productive and sustaining force) was born.

Just like the parts of a body, all Varnas had a significant role & were equally important in their playing, so we can say that the classifications & specifications of the Varna system were mostly positive.

There have been four varnas in ancient Hinduism: Brahman, Kshatriya, Vaishya & Shudra.

You’ll be astounded to know that these Varnas had absolutely nothing to do with birth. Instead, varnas were specifications for people attending certain karmas. Let’s make it clearer for you :

So, if a Brahman gains the knowledge of war & administration & becomes a Kshatriya, he could do that & if a Kshatriya dedicated his life to education, & help others in leading religious lives by transforming into a Brahman, he could do that as well. A very confounding fact is that Varnas could be changed! Yes. Since they were defined by actions & not birth unlike today, one could change their Varna if they wanted to.

You’d ask for an example at this point since it sounds unrealistic, I’ll tell you factually that Prishadhra, the son of a man named Manu who was the first-ever man, composed Manusmriti and became Shudra because of the murder of his cow & later on, Manu’s grandson, son of Dishta, became Vaishya because of his deeds. This information is all written in Vishnupuran. Shocking? Isn’t it?

In addition to that, there was no such Varna as ‘Dalit’. The ones who committed unscrupulous sins would fall out of their Varna & would be considered outcasts. It’s not at all what the modern caste system portrays at this point, untouchability was not thrown upon a group by default, it was a punishment that one would get after committing a hideous task.

The history of the caste system in India roots back to 1860. Between 1860 & 1920, the British colonial government included the caste system into their system of governance & appointed jobs only to certain castes. The word “caste” has a completely different origin & there isn’t any Indian translation of it but the closest we can get is the Sanskrit word ‘Varna’ or ‘Jati’. ‘Varna’ & ‘Jati’ had origins in the pre-modern era but the caste system as it is existing now is the result of its development during the British colonial period & Post-Mughal period.

The basis of the caste system during the British colonial era was ‘Jati’. The census of 1881 & even after that, the colonial ethnographers were using caste or Jati headings to classify & count the people of the then British India. In the census of 1891, sixty subgroups were included, each subgroup was again subdivided into six occupational & racial categories & the numbers kept increasing with the subsequent censuses.

Susan Bayley states that the colonial era census caste tables “ranked, standardized and cross-referenced jati listings for Indians on principles similar to zoology and botanical classifications, aiming to establish who was superior to whom by virtue of their supposed purity, occupational origins, and collective moral worth”.

The colonial officials were using these census-determined jatis or castes to decide which group of people were eligible for certain jobs & which ones were completely unreliable. Khushwant Singh, a Sikh historian & writer, and Tony Ballantyne, a History professor, have said that these colonial-era laws helped create and erect barriers within land-owning and landless castes in northwest India. Caste-based discrimination and denial of human rights by the colonial system had a similar impact elsewhere in India.

Nicholas Dirks has debated that Indian caste as we witness today is a “modern phenomenon,” as caste was “fundamentally transformed by British colonial rule”. Dirks thinks that before the colonial period, the caste system was way more loose & flexible than how it is today, colonial government has constructed it in a much more strict hierarchy with some castes receiving preferential treatment & some being criminalized on the other hand.

Our independent land has seen & felt caste-related violence to an extent. As a 2005 UN report says, approximately 31,440 cases of violent acts were committed against Dalits in 1996, as reported. The modern generation thinks that the discrimination of the caste system has come from Manusmriti but surprisingly, that’s wrong!

So, what exactly was written in Manusmriti? Did it actually give birth to caste discrimination or is it an incorrect assertion?

There was no mention of Dalits in the book. Chapter 10, Verse 4 states :

Brāhmaṇa, the Kshatriya, and the Vaisya castes (varṇa) are the twice-born ones, but the fourth, the Śūdra, has one birth only; there is no fifth (caste).

As you can see, it’s clearly written that no fifth caste had existed. Moreover, what manusmriti states is practical even today. When it says ‘twice born’, it’s not talking about another birth, it’s talking about a complete transformation.

For instance, Gautam Buddha left his kingdom in order to gain Moksh & returned as a new being full of knowledge & wisdom by doing Sadhna for years in a forest & later on led a community that still follows his insight & perspectives.

Buddha’s outlook on the caste system stated that all four castes were equal to him. He thought that on the metaphysical ground, after death, one should be reborn according to their karmas and not according to their caste or jati, he says,

“a man who is a murderer or a thief or a fornicator, or a liar, or a slanderer, or of violent speech or tattles or covets or is malevolent or holds wrong views, he will, after death at body’s dissolution pass to the state of misery and woe, whether he be a Brahmana, a Kshatriya, a Vaisya or a Sudra.”

In Assalāyana Sutta of Majjhima, it’s stated that the Buddha thought all castes had equal purity in blood regarding the concept of purity of caste blood.

Why did Dr. Ambedkar burn Manusmriti?

Dr. Ambedkar thought that Manusmriti, the religious text, was responsible for the caste discrimination & in protest, he publicly burnt Manusmriti in a bonfire on December 25th, 1927.

But do you know that Manusmriti is written in Sanskrit and Dr. Ambedkar did not know the Sanskrit language?

Yes, Dr. Ambedkar has also admitted in his book,” Who were the Sudras” that he was incapable of reading Sanskrit. Then by what means was he able to read the Manusmriti?

Whose translations did he read?

he read the incorrect translations of Manusmriti by Max Mueller, which was a misinterpretation of the Sanskrit language and the slokas.

Dr. Ambedkar felt bitter about the caste system and he felt so as he received poor treatment because of his caste even after being a man of incomparable brilliance& intellect. He stated that “the Out-caste is a by-product of the Caste-system. There will be outcasts as long as there are castes. Nothing can emancipate the Out-caste except the destruction of the Caste-system. Nothing can help to save Hindus and ensure their survival in the coming struggle except the purging of the Hindu Faith of this odious and vicious dogma”.

What was Vinayak Damodar Savarkar’s ideology on Caste System?

Vinayak Damodar Savarkar was a strong critic of the caste system & he made sure the kids belonging to the so-called lower castes attended school & got the education that was needed. He gave incentives to their parents & did everything he could. He said, “Once the children are educated together, they will not observe caste hierarchy in later life. They will not feel the need to observe caste division. In addition, the government should abandon the title ‘special schools for low caste children’. This very title creates a feeling of inferiority among children attending the school”.

He used to visit houses of people from different castes on Indian festivals & in fact; he brought up a girl child from a former so-called untouchable community. After reading Satyarth Prakash written by Dayanand Saraswati Ji, Savarkar got really inspired that he taught people from the untouchable community to read, write & recite the Gayatri Mantra. Now that’s some real & genuine effort don’t you think?

The caste system always had an influence over power & politics. There have been innumerable movements that took place in order to eliminate the injustice & inequality that has made a place in the Indian caste system. During the national movement, Gandhi used the term “Harijans” (God’s people) to refer to the so-called “untouchables” to make a positive attitude blossom towards them.

The “Dalits” (the ones who have been suppressed) were later termed as Scheduled Castes & Scheduled Tribe. The anti-caste Dalit movement started with Jyotirao Phule during the mid-19th century and he worked for the education & empowerment of women of the Shudra & Dalit communities & his protest reached all over India.

The castes have played a significant role in shaping the Indian society, occupations & values of our land. The numerous movements associated with the caste system have motivated our land to be more civil and respectful towards all the caste members.

Even though the modern caste system’s discrimination got less to no connection with the Varna system of the ancient Hinduism period, it’s still important to look at the changes and find the missing links in order to understand our nation in a better way.