Indian Stepwells- An Exceptional Confluence of Nature and Culture 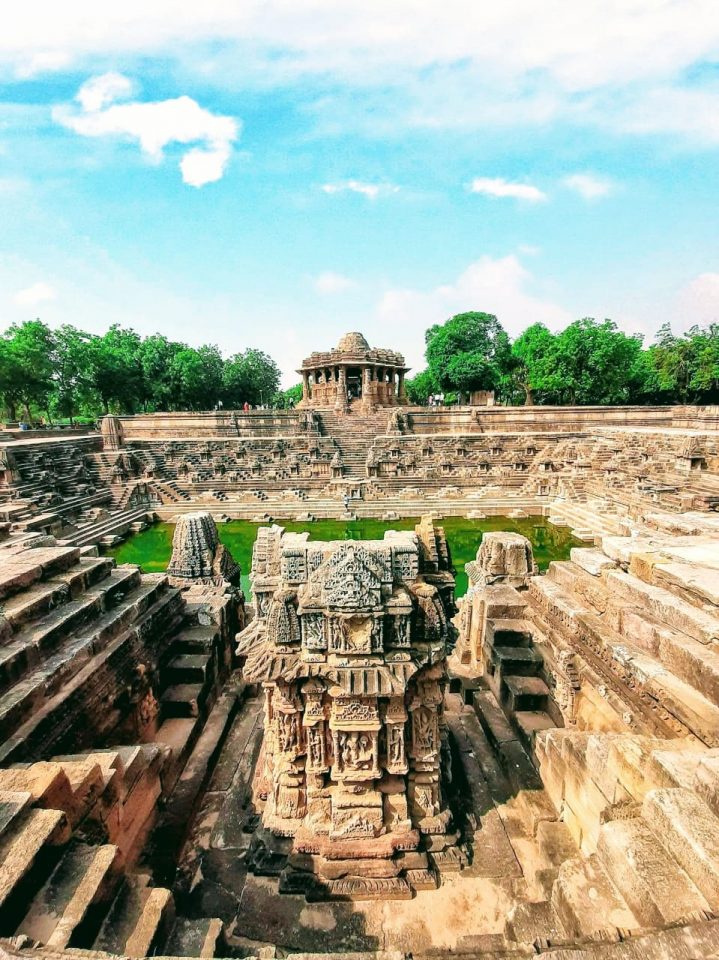 Ancient Indians led a crystal life in the company of nature. They knew how to utilise nature without exploiting it. Indian stepwells is a classic example of harmony between nature and man. Apart from being an embodiment of architectural mastery, Indian stepwells have social, cultural and religious significance.

Stepwells are wells or ponds in which the water is reached by descending a set of steps to the water level. These multi-storied structures are plunged into the earth with stairways that make it easier for people to maintain them well. They are customarily found in the dry, arid regions of the Indian subcontinent.

Even today, there are around 2000 surviving stepwells in India. These well- built, resilient and almost indestructible edifices have managed to withstand innumerable earthquakes and other disasters.

Indian stepwells go by different names in different places. In Hindi, they are referred to as ‘baoli’ or ‘baori’. In Gujarati and Marwari language, they are usually called ‘vav’ or ‘vaav’. Various enduring stepwells can be found across India, including in Karnataka, Gujarat, Rajasthan, Delhi, Madhya Pradesh, and Maharashtra. Rajasthan bawdi is the most famous and colloquial term among all.

Origin and history of Indian Stepwells

Stepwells emerged between the second and fourth centuries in order to ensure a year-round supply of water. The remains of the oldest stepwell are found at Dholavira archaeological site in the state of Gujarat. The “Great Bath” of Mohenjo-Daro is also one of the earliest public water tanks with steps on opposite directions.

Even Ashoka’s inscriptions narrate in great detail about the cultural heritage of Indian stepwells that have now found an indelible place in the history of India.

In fact, it was considered praiseworthy to commission the construction of a stepwell since it would be of service to the local population for all eternity. The Mughals were deeply impressed by this technique of water management and went on to build a large number of stepwells by incorporating their style of architecture.

The construction of stepwells boomed between the 11th and 16thcenturies under the reign of the Mughals. They even renovated the existing stepwells. But as a result of that, some of the Hindu religious inscriptions were vandalised.

Unlike Mughals, the British Raj couldn’t appreciate the mechanism and hence labelled it as barbaric. They perceived it as unhygienic and harmful. The British installed their own system of pipes and pumps pushing the Indian stepwells to neglect. Nevertheless, it continued to be an indication of luxury. Thus, during the 19th century, many stepwells were built in the private gardens of wealthy aristocrats. The last stepwell was built in 1903.

Indian stepwells employed an extraordinary technique of water harvesting. They were burrowed deep underground so as to arrive at the water table, the level at which the soil or rock is invariably soaked with water. This guaranteed quick access to groundwater during the summer season.

On the other hand, during the monsoon season, it served as a reservoir for the storage of rainwater. It was additionally filled in as a spot for social gatherings and religious ceremonies.

It was also used as an air-conditioning system since it provided solace from the daytime heat. People relished the cooling effect of the stored water. Travellers utilised stepwells as a refreshing haven for an overnight stay. Even today, some stepwells are used for irrigation purposes. Often the stored water was called a pond; categorised during religious occasions as a pond for worship and during the searing heat of daytime as a pond for bathing.

Indian Stepwells- A marvel of geometrical architecture in India

The oldest stepwells were basic, rudimentary structures which were merely built on utilitarian grounds. With the course of time, more emphasis was laid on transforming them into an emblem of geometrical perfection and an engineering triumph. Stepwells comprise of two parts: a vertical shaft from which water is drawn and a flight of stairs that twirl or zigzag to the extent of nine stories down into the cool, dark bowels where a puddle of water is formed.

Stepwells are arguably India’s most exceptional contribution to the pantheon of world architecture. The architecture of Stepwells demonstrated to the world that such fine frameworks can be built in the underground as well. These subterranean edifices shed light on the habitual act of collecting water.

The galleries and chambers are usually engraved with excessive detailing. Conventionally, Indian architecture takes its cue from the structure of the human body. And stepwells are not an exception. Yet, no two stepwells are identical. It is mainly based on where, when, and by whom they were entrusted. Even in terms of stylists, the variety is astounding. It can be extravagant or economical, linear or round and so on.

Hindu architects involved trabeated construction with corbel domes. It was chiselled with the images of deities, animals and humans. On the other hand, Muslim builders restrained from depicting any creatures. They also brought into light the arch and the “true” dome.

Later, these two traditions were merged and surged in a voguish manner for a brief period in Gujarat. The RudabaiVav and the Dada HarirVav were the results of this consummate of diverse styles.

Stepwells also became a source of inspiration for other architectures of India, especially those that integrated water into their design. Babur commissioned to build the Aram Bagh in Agra after being influenced by the structure of stepwells. Later, many other Mughal gardens included reflecting pools in their design.

Rani Ki Vav is considered the most sumptuous of all stepwells in India. It is situated in Gujarat and has inscriptions of Dasavataras or ten incarnations of Vishnu. It is one of the Indian entries in UNESCO’s World Heritage Site. This stepwell was built by Udayamati, the queen of Solanki dynasty in the memory of her late husband Bhimdev I.

Chand Baori stepwell is one of the unknown landmarks of India. It is probably the oldest surviving stepwell in India. It is around 1200-1300 years old. It is named after AbhaNagri, the king who built it. Chand Baori also depicts an image of Sheshasayee Vishnu reclining on a serpent called Ananta.

Agrasen Ki Baoli is found in the national capital of Delhi. Legends say that it must have been built during the time of Mahabharata. It was built under the reign of King Agrasen and is lined with 108 steps. Nowadays, it is one of the favourite film shooting locations in Delhi. The Archaeological Survey of India is responsible for its maintenance.

Rajaon ki Baoli dates back to the 16th century. It is situated in the serene woods of the Mehrauli Archaeological Park in Delhi. It was built by Daulat Khan of the Lodi dynasty.  Even though it employs an Islamic style of architecture, it is more or less ostentatious in nature.

Adalaj Vav is a result of the amalgamation of Indo-Islamic architecture and designs. It is a five-storied structure which was built in 1499 so as to provide a retreat for travellers and refugees. Even though the construction was started under the orders of King Rana Veer Singh, it was completed by King Mehmud Begada. More than 500 years later, it still remains unscathed.

These are the well-known ‘baoris’ in Rajasthan, Delhi and Gujarat that have historical, architectural as well as spiritual significance.

The architecture of Indian stepwells also commands a spiritual aura. As we descend into the subterranean landscape through the stairs, we will feel as if we are transported into another world which is withdrawn from the commotions of city life. As the banal noises get hushed and the harsh lights get dimmed, the intuitive facet of the mind gets illuminated.

Many people describe this as an out-of-body experience. This mystical experience is derived from the aura that surrounds the sanctum for ritual bathing and prayers. Traditionally, women used to offer prayers and gifts to the goddess of well-being for all her blessings.

Although they may seem like similar structures, there is a notable difference between stepwells and stepped ponds. Stepwells are not necessarily attached to temples. On the other hand, stepped ponds are more or less an extension of the temple. And they will always be emblazoned by the sunlight.

The State of Stepwells in India Today

Indian stepwells are widely regarded as an endangered species in the architectural spectrum. They are somehow excluded from the mainstream tourist trail. As a result of falling water tables and growing neglect, they are in danger of being extinct. Overgrown vegetation and gigantic buildings have concealed it from the public eye.

Many crumbling stepwells have become pits where garbage is being dumped. Even people who live closer to these stepwells have no clue that they exist.

Yet, stepwells continue to allure the people from all around the world with its revolutionary water harvesting system and striking architecture. Victoria Lautman, a Chicago based journalist was one of them. She was so dumbstruck by these subterranean relics that she travelled all over India and documented about 75 unique stepwells.

She published The Vanishing Stepwells of India as an ode to these glorious artefacts. She designated GPS coordinates for each of them so that people can find them easily. For her Indian stepwells were one of the architectural wonders of India.

The current water crisis in India has also motivated the government to preserve them. Several NGOs with due support from the Archaeological Survey of India have initiated schemes to renovate and protect existing stepwells. They managed to clear these degenerated step-wells off silt and debris, which has restored water for the first time after generations.

The Ministry of Tourism has started to advertise about these historical gems and this, in turn, has attracted many visitors from all over the world. Thus, gradually, these subterranean ghosts are getting the recognition that they deserve.