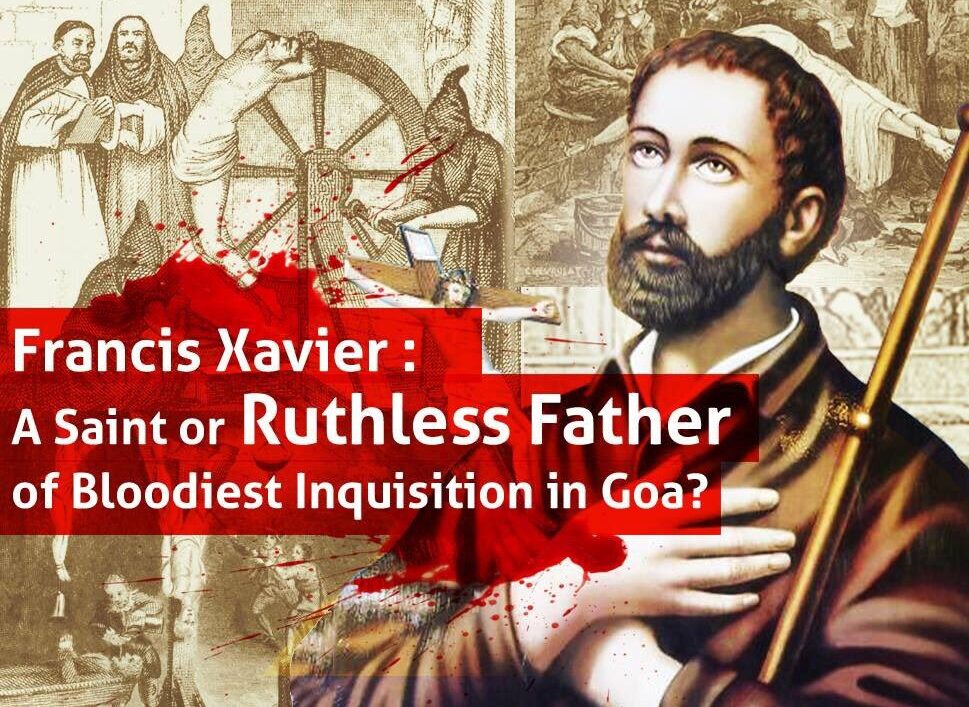 Francis Xavier was a Navarrés Catholic Missionary from Spain. He is also a co-founder of the Society of Jesus. Born in the municipality of Spain named Javier was assigned to lead an important mission of propagating Christianity in east and south Asia. It was that time when the European giants like French, Portuguese, Spanish, and the British were in a focused vision to establish colonies.

The parts of the world which the European captured were Non-Christian. Seeing the religious inclination of their colonies established, the religious missionaries were introduced in order to impart and propagate Christianity with an aim to establish and conquer the world by keeping religion as a shield.

The locals of the established colonies were said to believe and abandon their previous believes by brainwashing and creating superstitious ideas which resulted in them converting to Christianity. Francis Xavier had a way of dealing with the locals who went against his will, which resulted in him killing thousands of people during the Goa Inquisition.

According to him, he had a vision of freeing the poor Hindus from the clutches of the Brahmins who were at the pinnacle of the superiority of the caste triangle. It was basically converting them from their religion to Christianity through the age-old method of Baptism.

Francis Xavier landed in India at Goa in the year 1542. He was here to plant the seeds of Christianity but in a more ferocious and violent way which included oppression and execution of several people, forceful conversions, destroying Hindu temples and idols which gave him immense satisfaction and felt like he’s contributing to his cause.

Before Francis Xavier, there were several agitations and movements regarding the demolition of Hindu temples all around India masterminded by the Mughal rulers and some Portuguese sailors who tried to rule the southern part of India. This continued under the rule of Xavier when most of the Hindu temples in and around Goa were destroyed followed by an anti-Hindu policy that came into being passed by the government of Goa.

By this time, there was a clear understanding among the people of the kind of domination that can be expected from Francis Xavier and his missionaries. Xavier had overtaken the government and was now looking for land expansion for churches and

For his administrative purpose. More Hindus were converted during this period. More temples were destroyed, idols were broken down to pieces. There was a revolution to allow Christianity into India but the way Francis Xavier did was brutal and desperate.

The rules and atrocities

The moment the government of Goa passed the policy of anti-Hinduism, the atrocities started to become even more ruthless and cruel. The Hindus who denied or went against the will of conversion were tortured by all methods possible to forcefully convert their religion. The different methods of tortures conducted during the Inquisition of Goa were said to be used during ancient European times.

The above pic shows the torture instrument Rack– a sophisticated device that was used to dislocate the bones of a person and eventually tear the person’s limbs apart.

It mostly includes the uses of different instruments, weapons, and other relics which would result in severe torture by detaching the limbs, cutting ears, etc. which were carefully engineered by Francis Xavier to break the will of any person for him/her to get converted. He could make most of the things possible with the help of the Portuguese government.

Do you know During Goa Inquisition the image of the device which is shown above was used to rip off women breast?

By then, thousands of Hindus had lost their lives fighting a battle and being tortured by Francis Xavier and his missionaries with no proof or any kind of records lift behind of the people and families destroyed by him. Later, a doctor who escaped a similar galley in Lisbon wrote a book on the torturers that took place in Goa which was later achieved by the secretary of governor in Goa read about the methods they used.

The rules and regulations were made even worse by a minister who was appointed by the pope of the Vatican who said idols of any kind including stone, copper or any such material. He also ordered to clear off all the temples in a particular period of time. Due to his aggressive decision-making impulse, he was poisoned by a Hindu uprising and was killed. The income generated from the temples in India was also starting to be transferred to the churches leaving no space for the temples to survive.

The above picture shows the Catherine wheel. Breaking on the wheel, or Catherine Wheel was a form of torture and execution where the victim was placed on a cart-wheel and his limbs stretched out along the spokes. The wheel was made to slowly revolve, and the man’s bones broken with blows of an iron bar.

Differences made by the Portuguese

As the Portuguese started gripping tight control over Goa and surrounding areas, the temple priests were banned and were told to leave the then Portuguese territory. Other Hindu practices like celebrating Hindu festivals, ceremonies, Marriage ceremonies were starting to abolish.

The employment opportunities were increased for the converted Christians. There were legal acts and punishments for the Hindus who were found guilty while harassing a Christian. The Hindus were forced to attend masses in the churches to listen to the preachings etc. Such things were all headed by Francis Xavier and his missionaries. Due to this, there was an uneasy feel generated among the other religions with respect to Christianity, there was a stereotype created regarding the Christian community even after and during independence.

Francis Xavier was quite successful at propagating his ideology in Goa but left with creating a loop in the religion of Christianity. He left India in the year 1545 to the Makassar islands (present Indonesia). He died in the year 1552 in Shangchuan, China.

Now, years later, where Hindus, Christians and Muslims can live at least in a little peace, the concept of a nuclear family has developed. Why am I saying this? Lesser the people, lesser the opinions. The generation of our grandparents know how the Hindus were tortured just because they pray to what they believe in, but today’s parents still send their children to Francis Xavier school, because they prefer family over Hinduism.

It’s not wrong of the parents to look for an elite institution for their kids to learn, but they should also remember that today, they can worship the Hindu gods because the tyrant who led a huge massacre of Hindus is dead. After the Portuguese invasion was over, the high pope of the Vatican City even sent formal apologies to Muslims for their wrongful idea of conversion since Muslims were an enormous threat to the Christian community. They made peace with their enemies. Not only them, but the pope has made many apologies to various communities for the wrongdoing of churches and Christians.

Apologies to others, but what about Hindus?

Hindus got no form of apology when they were the ones who suffered the most. In 1998, it was 500 years since the end of Portuguese invasion and it would’ve been an excellent time to have made a formal apology to the Hindu community of India, but the Vatican City gave no consideration. Yet, present generation Hindus forget the blood their ancestors shed and continue to be influenced by the Christians. At present, there are almost 300 Xavier schools and 4 universities under the Xavier board in India. But what’s shocking is, the population of Christians is only 2.3% (officially) in India. So who are the other kids who are enrolled in these schools just because it’s a privileged institution? The Hindus who failed to know their history or the Hindus who are ready to take shame for the sake of their kids? Whatever it is, it has to stop. Now that you know, if you stop your Hindu kid from befriending a Christian kid, that’s complete racism. But can you change your kid’s school? Yes, there are other prestigious schools and colleges where your kids can become a good person.

Can you make your kids strongly believe in their religion from their young age? Of course, you can and this is the need of the hour! Christians can never stop preaching. It’s part of their life to boast about themselves to other people. They believe Jesus is the one true God just as much as Hindus believe in lord Shiva and lord Vishnu and how Muslims believe in Allah. However, we Hindus do not believe in the idea of superiority, unlike the Abrahamical religions. Their belief system cannot be changed. But don’t try to change others, people have their rights to believe in what they want. Do not destroy Hindu temples because Jesus told you so. No god has ever said to kill people. No god has ever said to spread hate. No god has ever said destroy life. It’s the humans who destroy their own lives. Let’s not celebrate someone who caused a nightmare among people. Do not destroy, just ignore and move forward. We live in a world where we have a lot of “best” options, not just one. So open your eyes and see, it’s a free nation, do not jump to conclusion because he told you so or she told you so. Those times are gone. Choose what you want the best for your kid or for yourself, which should be protecting Dharma at every instance and not forgetting the glory of Sanatan Dharma.

Francis Xavier is regarded as a saint in the books of History. He had a noble vision of propagating Christianity all around the globe or if not at least the places that he visited. The fact that he took up to him to destroy someone else’s belief and forcefully make them believe something was a drawback which is spoken by several Historians. He tortured and murdered people but disgraced a religion on that very basis by doing so. In the present day scenario, it is important for us to keep humanity first and working towards the development of human life, conserving the Environment and creating peace around making this world a better place to live.