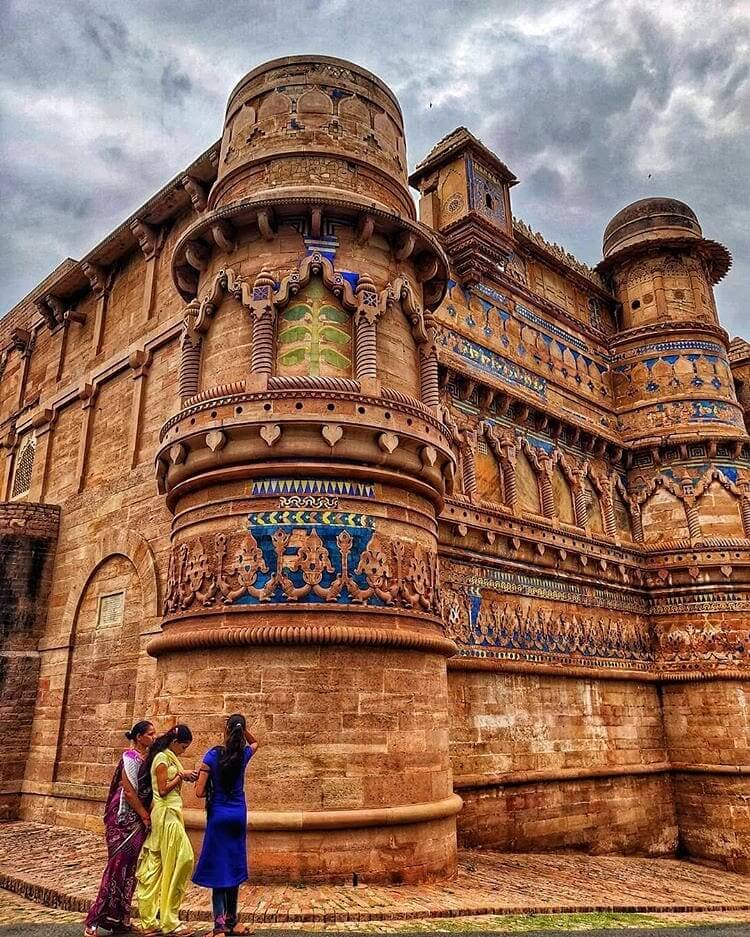 Gwalior Fort is referred to as the pearl amongst fortresses in India as proclaimed by the Mughal conqueror Babur. The Gwalior Fort is one of the most impenetrable fortresses that has no match in the whole of North and South India. It is a tourist spot, indubitably, worth visiting. The Gwalior Fort history is known for its rich past and stands at the peak of architectural grandeur.

Gwalior Fort in Madhya Pradesh is an incredible place in central India which is situated on the head of a vast rocky mountain whose regal surrounding makes the fort stand out from the rest. Its identity and architecture have a name of its own, evidence suggests that the fort has survived since the 6th Century.

A remarkable fact about Gwalior fort is that the oldest reference to the digit ‘zero’ has been found in the form of a carving inside a temple.

The construction of the Gwalior Fort took place in two sections, in two different time periods. Thus, this architectural marvel has interesting tales attached to it. Dynasties brimming with pride then, succumbing to defeat followed by another of the once same mind narrate about themselves through the walls of the great fort.

The Gwalior fort in Madhya Pradesh is surrounded by concrete walls of sandstone, enclosing three temples, six palaces, and several water tanks. It is truly a paragon of architectural marvel. The palaces here include the Man Mandir Palace, the Jahangir Mahal, the Gujari Mahal, the Karan Mahal and the Shah Jahan Mahal.

Different palaces and temples are a reflection of the architectural finery and skills that prospered during those times and continue to be appreciated to date. The fort covers about three square kilometres and has two entry gates: the Elephant Gate or Hathi Pul is the main entrance on the north-east side and the other known as the Badalgarh Gate on the south-west side.

Why Gwalior fort is called Gibraltar of India?

Gwalior Fort is entitled as the “Gibraltar of India”. This royal title bestowed by Babur paints panoramic insights of the old Gwalior town. The title also embodies the cultural confluence of North and South India, along with the strength of the fort’s unique defence system.

Gwalior fort history and its significance

Do you know who built Gwalior Fort?

According to archaeologists, there isn’t any solid proof to show exactly when the fort was constructed. However, a legend tells us that the Gwalior fort was built by a provincial king named Suraj Senin in 3CE. A saint called Gwalipa came roaming to the fort and met the king, who was suffering from leprosy.

When Gwalipa offered him some water from a sacred pond, now called Suraj Kund and is located within the fort complex, he immediately became healthy again. As a token of gratitude, the king named the fort and the town after him. The saint then gave the king the title of ‘Pal’- the protector and told him that as long as he and his family continue to bear this title, the fort would remain in their possession.

Gwalior Fort history unveils the truth that 83 generations of Suraj Sen dominated the fort. Yet the 84th king, Tej Karan, could not bear the title and lost the fort.

In the 6th century, an Huna emperor called Mihirakula ruled the fort during that time. Later in the 9th century, Gurjara-Pratiharas seized the fort, supervised, and also build the Teli Ka Mandir. After being captured and ruled by Muslim invaders for three centuries, the Tomars are known to have conquered the fort in 1398.

Maan Singh was the last and the most unique Tomar ruler, and he built numerous monuments inside the fort complex. The stunning turquoise blue-tiled Man Mandir Palace was under construction during his reign. He had a separate palace constructed for his wife Mrignayani, known as the Gujari Mahal. This Mahal has now being inaugurated as a state archaeological museum.

When Ibrahim Lodi attacked the fort in 1516, he brought an end to the proud reign of the Tomars.

The city of Gwalior is gleaming with the history of many powerful rulers and dynasties. The history of Gwalior Fort has passed through many hands over the centuries: the Mughals, the Marathas and eventually engulfed by the famous East India Company.

After this, there were several repetitive transfers between the rule of the Marathas and the Britishers. Finally, in 1844, the Maratha Scindia family of Gwalior, as the British government’s protectorate, controlled the fort.

During the revolution of 1857, the fort witnessed battles fought by Rani Lakshmibai, the Queen of Jhansi. She is known to have sought refuge inside the fort. Her valour and might that far surpassed men who fought beside her is known to have begun from the giant doors of the fort.

Until India gained independence in 1947, the Scindias continued their reign over the fort and constructed several monuments.

Monuments and temples that narrate the history of Gwalior fort

The most attractive spot in the entire premises is no doubt the Man Mandir Palace. Its complex architecture adds a new life to the entire structure of the fort. The Teli-ka-Mandir, built in the 9th-century Dravidian style, rises to a height of over 100 feet and is famous for its blend of South Indian architecture with North Indian decorative motifs.

The unique Jain temple monuments inside the fort, with the Siddhachal Caves, Gopachal rock-cut Jain statues and thousands of Jain Tirthankar idols were destroyed during the Mughal invasion.

Highlights on the Gwalior fort Gurdwara

Gurudwara Data Bandi Chhor is another religious site established inside the fort’s complex. Gwalior fort history reveals that it was where Sikh Guru Hargobind Sahib along with 52 Rajput kings were held as hostages by the Mughal Emperor Jahangir.

The Gwalior fort Gurdwara is a memorial constructed in devotion to Guru Hargobind. It is now considered as one of the significant Sikh pilgrimage sites, visited by many tourists.  Man Mandir Palace, Gujari Mahal, Assi Khamba Ki Baoli, and Suraj Kund are other important monuments found in the complex.

The Gwalior Fort organizes a magnificent sound and light program every evening. This show is extremely well executed and makes you feel as if you are a part of the rich Gwalior Fort history and the love story of Raja Man Singh and his queen Mrignayani.

The show takes place in the amphitheatre atMan Mandir. The timings for the show are as follows:

How to reach Gwalior Fort

The best way to arrive at the Gwalior Fort is by auto-rickshaw which can reach up to the Urvai Gate, the western gateway of the fort. There are two ways to the fort, the second one being the eastern gate does not permit any vehicle. Both the paths are steep treks after one point. Nevertheless, the charming illustration of this impressive fort from the eastern side makes the whole trip worthwhile.

Make sure not to miss the beautiful rock sculptures on your way down from the western side. The majestic history of Gwalior fort expresses the wonders of a bygone era in the form of a wealth of art and architecture. An ideal destination in Madhya Pradesh that represents the richness of India’s diverse culture and heritage.