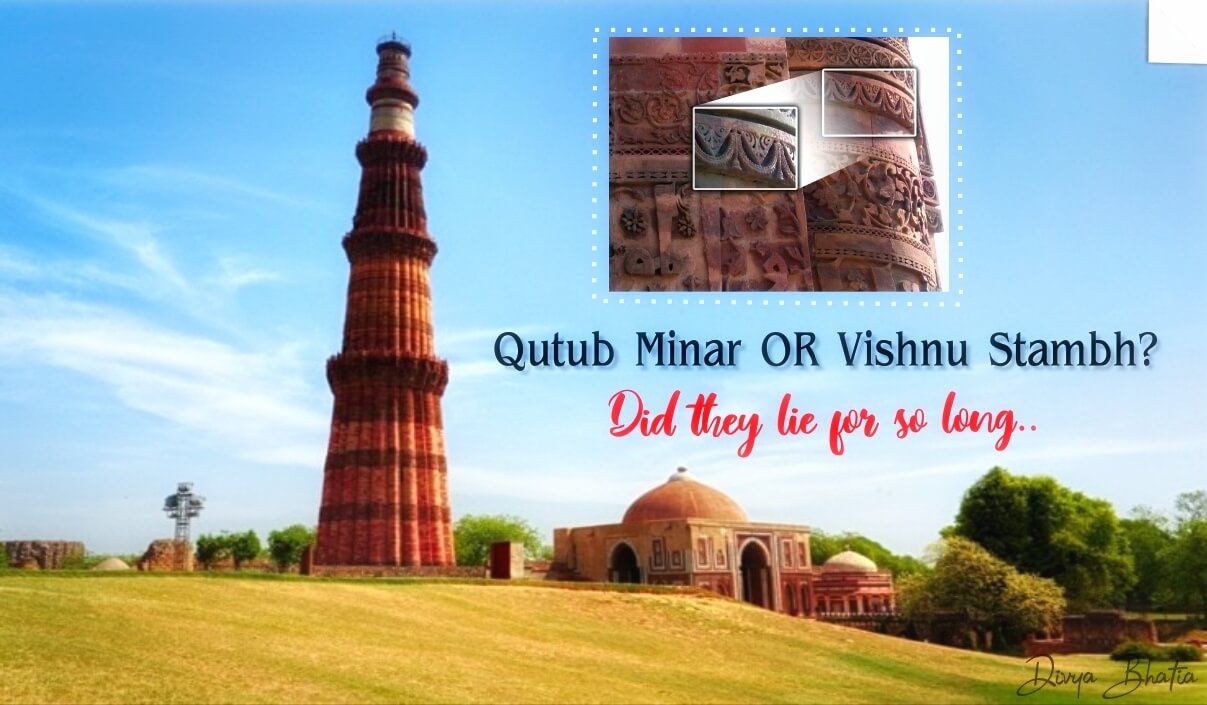 Qutub Minar has been believed to be an Islamic victory tower & we’ve read plenty about it in our textbooks, so far. But, what if I tell you that Qutub Minar is actually Dhruv Stambh, a Hindu temple & a former astronomical observatory? We’re going to go through the history of Qutub Minar & highlight the features of this tower that evidently prove it to be a Hindu construction. Let’s look into it.

Qutub Minar is one of the most famous monuments of our country & in fact, of the entire world, but have you ever wondered where its name has actually been derived from? The Arabic word “Qutub” literally means “pole”, “pivot”, or “axis” & this word can be used as an astronomical term or a symbol of spirituality. So, “Qutub Minar” basically signifies an astronomical tower.

A fair amount of importance has always been given to Qutub Minar, in textbooks, in tourism & in general but we’ve always missed a massive part of its actual history.

According to popular belief, the Qutub Minar was built by Qutub Uddin as a victory tower celebrating Md. Ghori’s victory over the Rajputs. But this is a hoax…

The Qutb Complex was originally & actually built upon 27 Hindu and Jain Temple. These temples were sent under destruction by the Islamic invaders so that they could obtain stone and raw material for their mosques. These temples that we’re talking about existed way before Ghori was even born.

The rulers from the slave dynasty planned to construct their buildings, but unfortunately, they were short of raw material. By destroying these majestic temples, they added another purpose to their deed. Demolishing temples meant that the new Islamic Invaders disrespected the religion which was being practised in the locality.

Because of their hurry, they couldn’t even demolish the previous religious constructions properly, remains of the Hindu temples can still be seen in the minar complex

As we’ve discussed in the beginning, the word ‘Qutb’ actually signified astronomy, but later on, it got somewhat associated with the name of Sultan Qutub Uddin & led to incorrect assertions. The historians of that age are said to be slaves of the Mughal period & they took the name of the minar as an opportunity to sing along the lines of praise in order to please the Islamic intruders.

You might also be interested to know about Taj Mahal Facts converted from Tejo Mahalaya, a Shiv temple

Digging into history of Qutub Minar

Let’s go back for a moment, what’s the popular belief & believed history of the Qutb Minar that we read in textbooks now?

Qutb’s Minar is one of the finest & most famous monuments in India, & in fact in the entire world. The Qutb Minar also known as Qutub Minar and Qutab Minar is a “victory tower” that’s a part of the Qutb Complex, a UNESCO World Heritage Site in the Mehrauli area of New Delhi, India. The height of Qutb’s Minar is 72.5 meters, making it the tallest minaret in the world built of red sandstones. The tower has a 14.3 meters (47 feet) base diameter, reducing to 2.7 meters (9 feet) at the very peak. It has a spiral staircase of 379 steps.

It was built on the ruins of Lal Kot as a symbolic victory of Md. Ghori over the Rajputs. Qutb-ud-din Aibak, a deputy & viceroy of Md. Ghori, the founder of the Delhi Sultanate, after the death of Muhammad of Ghor’s, began the construction of the Qutb Minar’s first story in 1199. Lines praising Md. Ghori is inscribed on this level. Aibak’s successor and son-in-law, Iltutmish, completed the other three storeys. A lightning strike in 1369 damaged the then top story, the ruler at the time, Firuz Shah Tughlaq, replaced the damaged story and added one more. Sher Shah Suri added an entrance to the construction while he was ruling. It is usually believed that the tower is named for Qutb-ud-din Aibak, who began it, but there is another possibility that it is named after Khwaja Qutbuddin Bakhtiar Kaki, a 13th-century Sufi saint, whom Shamsuddin Iltutmish was a huge devotee of.

Numerous rulers later on, including Tughlaq, Alauddin Khalji & even the British added structures to this construction. Other than the Qutb Minar and the Quwwat ul-Islam Mosque, the other structures of the complex include the Alai Darwaza Gate, the Alai Minar, and the Iron Pillar.

Present Condition of the complex

Today, the entire adjoining area spread over with a bunch of ancient monuments, including Balban’s Tomb, which has been constructed by the Archaeological Survey of India  (ASI).  40 monuments have later been in the Park. It is also the venue of the annual ‘Qutub Festival’, held in winter, around November–December, where various artists, musicians, and dancers perform over three days.

And now, coming to the actual point, inscriptions on the minar indicate that the minar was built upon the destruction of 27 Hindu & Jain Temple. Is Qutub Minar actually a Hindu structure or an astronomical tower? Let’s dig deeper.

The township which adjoins the Minar complex is known as Mehrauli. Surprisingly enough, that’s actually a Sanskrit word, ‘Mihira-awali’. It indicates that the township was related to the well-known astronomer Mihira of Vikramaditya’s court, who lived along with his helpers, mathematicians, and technicians in that area. They actually used this so-called Qutub tower as an astronomical observatory for studying. Another amazing fact is that the tower was surrounded by pavilions that were dedicated to the 27 constellations of the Hindu Zodiac.

Mihir alias Varah Mihir was the renowned mathematician, astronomer, and scientist in Vikramaditya’s court who was the author of the famous book ‘Vrihatsamhitayam’. The Qutub complex was used as his astronomical observatory, of which the Qutub Minar was a part, previously containing seven stories indicating the seven main planets or the seven days of a week. It is estimated that this observatory was set up during 4th Century A.D to 6th Century A.D. It is the place where numerous calculations on the movement of planets were performed & Vedic theories got validated, providing a major in the field of astronomy.

Justification for history of Qutub Minar being a Hindu structure

So, what exactly about the Qutub Minar justifies what has been stated?

Qutubuddin has left an inscription on the minar. This inscription does state that he destroyed these pavilions, but he has not said that he constructed any tower afterwards. The ravaged temple was later renamed as Quwat-ul-Islam mosque.

About the Qutub Minar itself there is an overwhelming amount of proof that it was a Hindu tower existing & being raised hundreds of years before Qutub-ud-din and therefore, it is completely wrong to ascribe the tower to Qutubuddin.

So what do we come to know from the aerial view about the history of Qutub Minar?

This view illustrates the astronomical dial, representing the zodiacs & hours of the day for the provision of measurement & time during movements of stars in different zodiacs.

The research of Shri M.S Bhatnagar concluded that only the outer stone casing was defied by the ruling Muslim Sultans & was in reverse used to inscribe Qurani Verses. The tower’s outer wall is pretty similar to the Black Band Dial & it has 24 segments, representing 24 hours of a day. The structure of twelve complete dials on the ground represents twelve zodiacs of astronomy. The expansions, proportions & dimensions of the stories of the tower show the Zodiac dial with crystal clarity.

Another very important part of the aerial view of the tower, as can be seen in the picture, is that it resembles a lotus, & we all know that the flower lotus signifies Hindu author-ship in medieval buildings.

The entrance direction of the tower is something to take into consideration. Noted historian, P. N. Oak stated that the entrance of the tower faces north & not the west as practised in Islamic theology. That’s indeed true, all buildings made according to the Vastu Shastra should have a northern or northeastern entrance, that’s how it is with Qutub Minar!

The architecture of Qutub Minar has a lot to express about it is an observatory. The proportion of the pillars, the circular staircases, the outer petals, the height of the stories & the missing ones as well all indicate scientific geometry.

The Bell & Chain Motifs on the interior & exterior walls of Qutub Minar make it evident that it was indeed a Hindu structure. If it was originally an Islamic structure, motifs that signify the Hindu author-ship would never be allowed to be used in the making of this Minar.

The archaeologists of India have recorded incorrect history without acquiring any knowledge about the destroyed and defaced Hindu godly statues and motifs in and around this minar. Stones that have been dislodged from the so-called Qutub Minar actually own Hindu author-ship-related pictures on one side with Arabic lettering on the other side. These stones have now been located in the Museum. These clearly show that Muslim intruders used to eliminate the stone-casing of Hindu constructions, turn the stones inside out to hide the image, and inscribe Arabic lettering on the fresh front. Muslim captors had a tendency to dismantle the surface stones of the so-called Kutab tower in Delhi, reversing them and inscribing the Koran on the exterior. This Islamic forgery got under the limelight as those stones started falling off the tower.

Do you know that it is prohibited in Islam to have motifs of God or humans?

Still, these can be seen in Qutub Minar. The war scene from Ramayan and Mahabharat. Many Hindu Gods and Goddesses.

Do you still believe this was an Islamic structure???

The authenticity of the Arabic verses on the walls of Qutub Minar is to be questioned. The cornice patterns on the minar indicate signs of tampering, ending abruptly or in a medley of incongruent lines. The Arabic lettering is in fact dispersed with Hindu authorship-related motifs like lotus buds, hanging limp, etc.

But hey, this is not only said by Hindus but a Muslim scholar!!!

Sir Sayyid Ahmad Khan, a stalwart Muslim and a great scholar has admitted that the tower is actually a Hindu building.

Another interesting but practical fact is that Qutub Minar faces north, which means towards the pole star, Dhruv (north star), unlike any other Islamic constructions!

This minar primarily had seven stories representing the week, but of those, only five exist currently. The sixth was dismantled, destroyed down, and raised again on the lawns nearby.

Shockingly enough, the very seventh story of this minar actually had a statue of the four-faced Brahma, holding the Vedas at the beginning of creation. Above the Brahma statue was a white marble canopy with gold bell patterns laid within it.

As we’ve discussed before, the Arabic term ‘Qutub Minar‘ describes an astronomical Tower & with what we’ve stated, I believe it makes crystal clear evidence that Qutub Minar was indeed Dhruv Stambh. There’s always plenty to learn from the monuments of our country if we look closely.