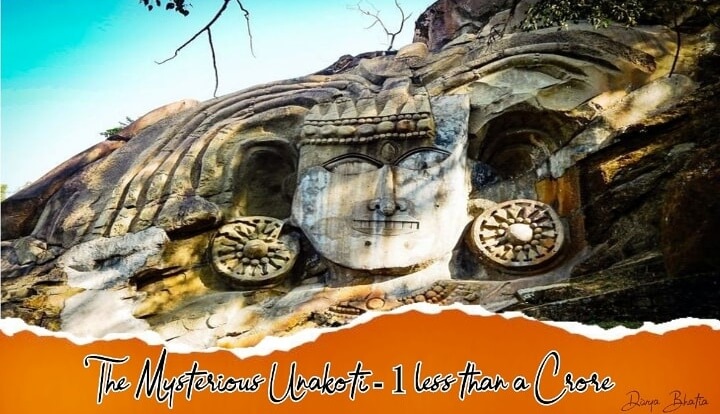 If you think Mount Rushmore is the only mountain with carved faces, well, you need to think twice. Tremendous Hindu culture has so many dynamics which marks its specificity on the desk of the whole world. Even if we recall the history of our country, then we will find that the rulers of historic age also emphasized a spectacular culture of the realm. Temples were not only marked for worshipping but demonstrated the splendid colours of heritage. Art and architecture, for centuries, have marked their significance. But the contradiction lies in the fact that being lodged in the legacy of art and architecture, there are many places in the subcontinent that are unsung for their different and mystical history. One such is UNAKOTI TEMPLE.

Let’s see, what is the meaning of Unakoti?, the initial name of the place is believed to have been Subrai Khung claimed by Jamatia Hoda. But what exactly does it mean? In Bengali, it is called UNAKOTI, which means one less than a crore. It is located 187 km distant from the capital city of Tripura that is Agartala. The Unakoti in Tripura has religious importance for the native tribes. The name itself is so unique and influential, too, the location of the place.

Moreover, if you are wondering why is Unakoti famous, the name is the beauty of the place which awestruck the visitors who visit the place from different parts of the globe. It possesses a beautiful setting in the lap of an alluring and gigantic forest hill in Tripura.

This amazing Unakoti temple counts its ages about 11-12 centuries old. Even after occupying such a pronounced age, it still holds the charm of art pieces that are carved out. The reason why it is known and famed is for the huge, detersive, and masterpieces of art, rock-cut sculptors.

The place associates itself with many fascinating stories or the ‘Unakoti story’, which connects us with the rich culture and mythology of the country. According to a legend, once Lord Shiva along with 99 lakh, 99 thousand 999 gods and goddesses were passing by. They halted at Unakoti, but lord Shiva put up a condition stating that they all need to be awake before the sunrise. Except for Lord Shiva, all gods and goddesses failed to rise and fulfil the condition. Being in strong aggression, lord Shiva brutally cursed them to stay at the place in the form of stone sculptors. That is what the scripture says, in human terms, if you ask who built the Unakoti?

Another tale which adds in the queue defines a person named Kalu Kumar spotted Shiva and Parvati travelling together towards Mount Meru. Kalu Kumar requested the divine couple that if he could also join them. Shiva agreed but on the condition of asking him to prepare around a crore sculptor comprising all the deities at daybreak. Kumar took up his work and embedded himself in making sculptures. But the fortune was not on his side this time; he created only 99 lakhs 99thousand 999 sculptors and missed one which was required to turn it to a crore. Thus, in line with the condition, he did not succeed and had not had the chance to travel with Shiva and Parvati to their abode.

The Unakoti caves have 99 lakh, 99 thousand 999 sculptors, as mentioned, what do they depict? The sculptors have an elongated chain of images depicting some of the most worshipped Gods and goddesses. Considering this, if you ask where the rock-cut gigantic image of Ganesh Ji is found in Tripura, you have your answer; it is the most significant is the gigantic rock-cut image of Lord Ganesha, which is an integral part of the grandeur located in Tripura. Statue of Shiva named and famed as Unakotishwara Kal Bhairav. The most fascinating fact regarding the statue of Shiva is the headdress of height 10 feet. The place also has the sculptors of Durga, lion and Yamuna. This schematic work also contains structures of 2 Nandi bulls, Hanuman and Ravana.

Why there are so many people in the country who even did not know the name of this place? Even after having such splendid architecture, the place lacks the evidence to decipher its illustrious importance. It is because the place never got that archaeological attention which it deserves. History is a matter of facts, and this place does not have those written facts which can mark its authenticity.

For sustainable and systematic administration this district of Tripura has its headquarters in Kailashahara (Kailashahar Unakoti Tripura), which is near to Bangladesh border. It firmly presents a beautiful blend of culture and heritage of the country. To celebrate the sanctity of the place and carved structures, every year ‘Mela’ is organized near Sitakund or Ashtamikund to commemorate the divinity of the place. Although there is no written proof for the stories regarding this mysterious part of the territory.

Once there was the time when India was laden with the considerable spark of temples which still exist. But the difference comes on the point of showcasing it to the spectators of the whole world who are interested in mesmerizing the history and culture of the region.

What you will not speak will not be enacted. Same stands for the culturally rich site UNAKOTI TEMPLE. It is a blissful delight for those who firmly admire the mythology of the nation and also for those who wander for the ancient piece of flair.

Unakoti hills not only connects itself with the Hindu culture but every year this place witness many Buddha monks, coming here for continuing their sacred process of attaining salvation. This place indeed will help the travellers in rejuvenating and kick life with a better start. Commendable art will bind you in a thought of ‘the possibility of such masterpiece in the ancient time with no modern technique.’

On the grounds of geography, we can mark it somewhat, not connected with the rest of the country. Nevertheless, this temple, along with stories, having no written records, connects its origin and establishment strongly with the whole nation. The vibe this pace reflects strikes directly to the souls that will give a cool break out of the hush and rush going life.

Surely, it demarcates the glory of rich Indian culture which needs to be acknowledged and celebrated.

To discover the best of Tripura,

To take the Taste of Tripura!