The mystery of Death and the death rituals in Hinduism 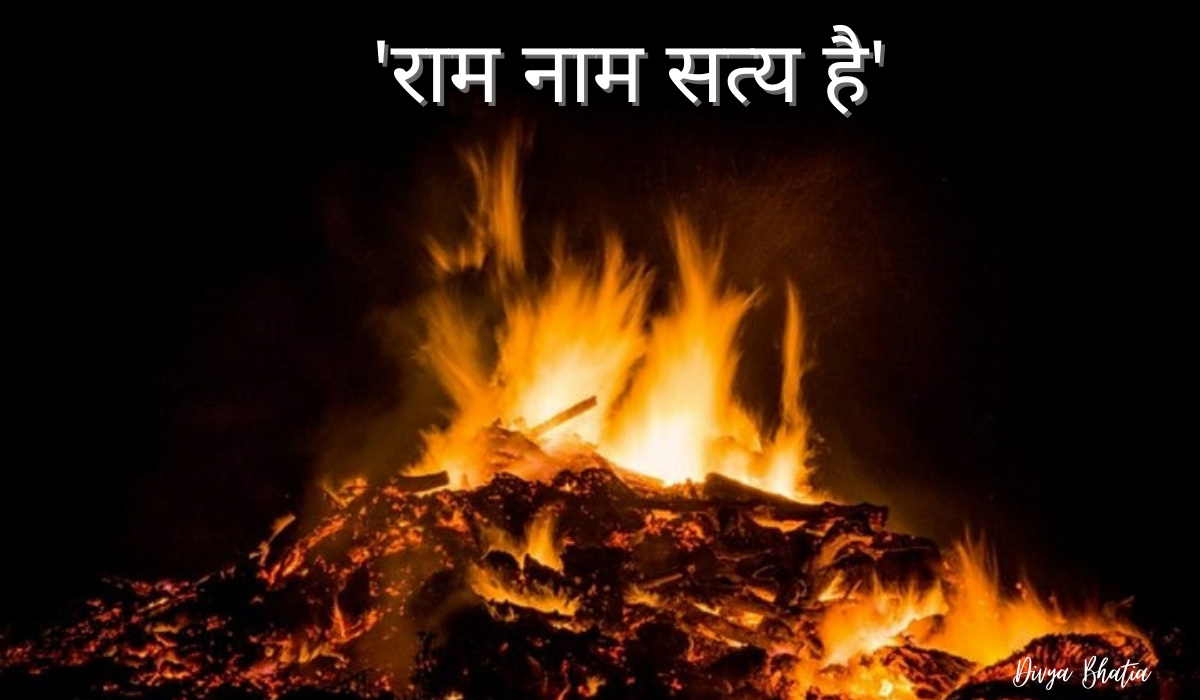 A little boy who sailed to America with his parents, his father held onto high hopes for a bright future. He played and listened to stories when his mother found time from her household chores. He was like any other boy, sweet and full of life unaware of the inevitable end that all life ultimately has to face, followed by the death rituals.

No one no matter how close could ever think that this apple of everyone’s eyes will one day turn out to be the most dreaded gangster known eternally to mankind. His teenage years were spent in delinquency, not because his childhood was one full of abuse and scorn, but out of sheer adrenalin rush.

His friends, who later became his partners in crime, gave him the title of ‘scarface’ to add to the ominous aura that emanated from him. He is a celebrated icon in the underworld and amongst the members of his ‘The Chicago Outfit’.

He is none other than Al Capone- the Italian mobster known for his ruthlessness and gregarious personality. But, though his rise to power was indeed something of an adrenalin rush only to find it all being snatched away, painfully, by the jaws of death. Death rituals here, as per the culture and religion of the west was merely a means to honour his lifeless body.

Death rituals- Afterlife and the soul

The name Al Capone makes our senses rush in a torrent, as if the very essence of fame, endless profit, and insatiable lust. This is what we all want, isn’t it? Well, as time passes we come to know that the Buddha was right: nothing is of permanence, not even the invincible time which explains to us how to overcome the fear of death.

The scenes from the movie ‘Fonzo’ give a vivid portrayal of the principle of cause and effect, and the impermanence of our physical self. Al Capone as shown in the movie lived his life like a Hyena inherently meant for the wild. Thus, his existence came to an end too in the way he had lived his life unable to come to terms with the fact that ‘death is inevitable’.

Burdened by his delusions, his heart began to develop cracks due to a prolonged spiritual famine. When pictures of his end began to wreak havoc in his mind, unable to understand the death-dream meaning; made of his hatred, jealousy, blind lust, and animality. These eventually transformed into worms that fed on him from within- both physically and spiritually.

Thus, in the end, as per the west oblivion is where everything recedes; death is nothing, not even the air which can be felt. So, as the world today follows the west- this deep consternation called ‘fear of death’ has to be dealt with head-on.

What happens after death in Hinduism and what kind of death rituals are being followed?

But, Sanathan Dharma says otherwise, which is five thousand years old officially, and thirty thousand years old as per the archaeological evidence of the remains of the city of Dwarka. Death is not the end, but a new beginning beyond any great intellectual comprehensions or theories.

He, who is the most powerful man in the world as per Sanathan knows his true existence beyond the decaying physical self that exists forever in the universe.

This cosmic energy if realized while alive is said to be the Buddha-nature. Sages and saints swathed in the storms of the ignorant secular life have only one thing to say the undeniable eternity of life. In Hinduism, many Hindu rituals after death in the family are conducted so that the departed soul attains salvation.

The mystery of death – Karma

Karma Definition: The result of a person’s actions as well as the actions themselves basically define  Karma. However, Karma is a bitch, karma is bygone, karma is shit or the best- I write my own karma. Well, whoever the high-handed people or whatever the words karma can’t be overcome by annihilating or suppressing the person in front. It quite evidently, only adds to the store of our negative karma.

Thus, the consequences and effects which we receive from time to time through our conduct, can’t be overcome with mere physical and intellectual might. If it were so, then Al Capone would have been the happiest man alive, proving the Buddha, Shankaracharya, Nichiren Daishonin, Valmiki, and Jesus wrong.

Death Rituals- Hinduism and the Vedas

[To the dead man]: Go forth, go forth on those ancient paths on which our ancient fathers passed beyond. There you shall see the two kings, Yama and Varuna, rejoicing in the sacrificial drink

The ancient path unknown to a mere mortal till the time he dies. This unknown path discovered by sages who meticulously searched within, the meaning of life and let the world know through their ink. Transcending hunger, thirst, cravings, and living through the death rituals to discover the last thing unknown on this earth.

Well, the Vedas and Upanishads came into existence long before the enlightenment of the Buddha. Thus, esoteric concepts regarding life and death, mostly rich in literature were rampant across the different sects of people, who indulged in realizing god by treading on different paths. The path could be a hard one made of deprivation or one intoxicated in pleasures, but the medium was the same that of self-realization.

Thus, the unknown path with time came to be known as the existence of human life, or that of any living being existing eternally in the universe, across countless lifetimes. The Upanishads and the Buddha join hands on the one strict law, that of Karma.

Death rituals- Who are Yama and Varuna?

Hindu god of death and the god of the sky, Yama and Varuna, both have neither beginning nor end. Both are colourless and immortal, whose existence depends entirely on the minds and eyes of the people. Thus, neither abstract nor of substance the Hindu god of death and sky that is Yama and Varuna are itself the unknown path, and the destination as well.

Thus, these two lines show the artistic and contemplative nature of the Vedas.

Indra and Soma, let evil heat boil up around him who plots evil, like a pot set on a fire. Set unrelenting hatred against the fiend, the flesh-eating Brahmin-hater with an evil eye

Evil and good coincide exactly with hell and heaven as the two sides of the same door. Evil has the power to manifest good, and good can too suddenly turn evil. This relentless mind is all about good and evil, both in mutual possession of each other. Thus, one who gives in to his evil thoughts and cravings unleashes wrath upon himself as the cycle of cause and effect can’t judge or take sides.

The sages perform rituals as they write their prayers, mind, heart, and realization on the smooth palm leaves, in an effort to convey the gods. Here, the gods are Indra and Soma who represent rain and vegetation. Both are dependent on each other to flourish in the sky, and on the earth. Thus, the sages yearn for the gods to deprive the evil of both water and food, which constitutes the physical existence of life. Here, death is likened to evil, and good is likened to life.

“his body neither existing nor not existing, neither caused nor conditioned, neither self nor other,

neither square nor round, neither short nor long, neither appearing nor disappearing, neither born nor extinguished,

neither created nor arising, neither acted nor made, neither sitting nor lying down, neither walking or standing,

neither right nor wrong, neither gaining nor losing, neither that nor this, neither departing nor coming,

neither blue nor yellow, neither red nor white, neither crimson or purple or any other sort of colour,”

The body of the Buddha is described here as the atman, which cannot be imagined in any form. This atman is who we are, the universal self, cosmic energy- life itself. Clouds dance in ecstasy, blind has become joy for all two-footed and four-footed creatures. Leaves sway and swirl in the boisterous wind, branches thick and thin rustle against each other for they need not fear decay.

The sky appears to peck the earth, and the earth appears to overflow with life, emerging from its countless cracks. The purpose of life driven by such wonder of creation shines as if the darkening twilight has turned into a dream again. Ah, these eyes can today see the painting come to life, no blurry vision caused by delusions of ignorance.

Thus, nature and man both celebrated the day Siddhartha became the Buddha. At the last one shall be relieved of the chains of suffering associated with death that cannot be overcome with the believed death rituals. Buddhism and the Upanishads quite like each other though in terms of theory, at the core they indeed differ when it comes to pragmatic considerations. Hence, this theory explains to us what is a philosophy of life in terms of the Buddha.

What happens after death according to science?

Well, the west with its advanced technology, knowledge, and calculated minds is trying to beat death by reviving the dead person. They think of an individual entity, as someone or something made of blood, heart, brain, organs, tissues, bones, marrow, and cells above all. Life for them isn’t beyond the senses, but the senses itself.

Thus, as per science which is the result of empirical analysis and maths based on the six senses of a man- smell, touch, taste, hearing, sight, and mind. Death types may differ but, death in general is when the heart stops beating. This is how death is defined for ninety-five per cent of the people.

Though artificial intelligence, on which scientists are working day and night enables one’s heart to beat a bit longer after its natural pause and this seems to be the only death ritual that science follows. But, thus death overcomes sooner or later, remaining inevitable as ever.

Death Rituals- The justification given by science

As per Dr Sam Parnia, who is a director in the New York University Langone Medical centre- “As soon as the heart stops beating, a person stops breathing and their brain shuts down, causing all life-processes to cease”. Hence, the phrase strength is life and weakness is death both hold the truth as long as the person is alive.

These explanations, observations, and articulated theories deck countless pages of countless books. Here, the emphasis is merely on the physiological functions which like all things on earth is subject to decay. Even iron rusts and disappears with time, so what is there to say about our soft flesh!

So, science has nothing to say regarding the death of the person after his heart stops beating. Science is only concerned with the effort to keep the heart beating as long as possible.