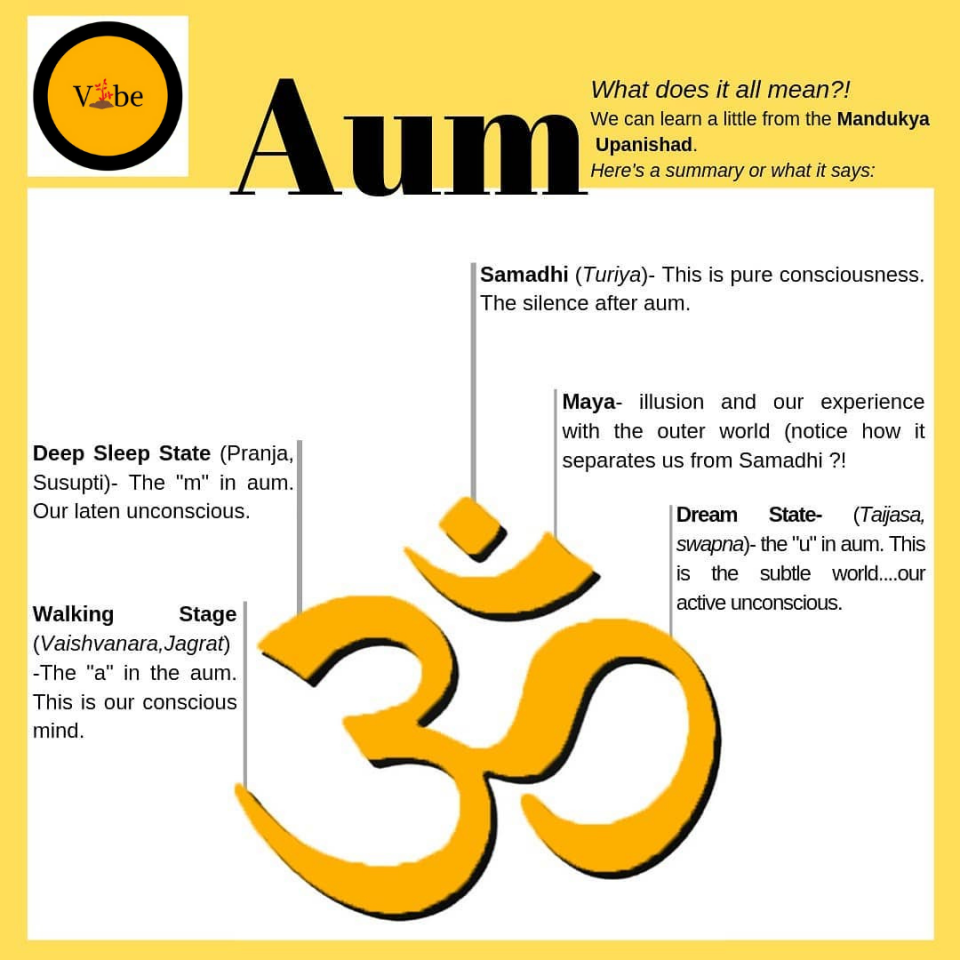 The chanting of AUM takes place three times as per the Sanathan philosophy. Aum chanting benefits include connection with the cosmos through spiritual awakening. AUM is the divine mantra for peaceful mind where all intricate thoughts nullify to give rise to the metaphysical aspect of our lives.

AUM indicates towards the very nature of creation which is to create, preserve and destroy. As it has been justified in writings that interpret the Sanathan philosophy, each letter has a profound meaning-:

A (Akaar): represents the oscillation that indicates towards the creation of the universe,

U (Ukaar): represents the vibration that secures the creation,

M (Makaar): depicts the vibration that dissolves the manifested universe back into the infinite Spirit.

Chanting Aum in Other Religions

The simple meaning of Om is the vibration through which the supreme spirit of the self is manifested. Paramahansa Yogananda has explained that everything – all matter, all energy, all thoughts, exist in Aum. The myriad philosophies and religions across the world have given different names to the divine chant.

For example- the Bible calls it ‘Amen’ (being sure, faithful) and St. John called it the term of God. Muslims, in Arabic, have given the word ‘Amin’, and Tibetans call it “Hum”.

What are the benefits of chanting Om Namah Shivaya?

Chanting Om Namah Shivaya is beneficial to not only the body but also the intellect. In order to understand the depth behind chanting Aum with respect to the body and intellect do read the article on our site The Science behind Mahashivratri. It is considered to be a healing mantra that empowers an individual to defeat and rise above his own negativity, at the same time remain impervious to the pessimism displayed by the many ignorant and depraved.

The recitation of this small word moves the heart and spirit to the state in which one feels immense joy and freedom. It is often reiterated that chanting of aum is none other than the revelation of the higher self. It is a prayer to the all-transcending Shiva. The chant ‘Namah Shivaya’ is made of five akshars Na, Ma, Si, Va, Ya, which means the five components of nature- earth, water, fire, air, and space.

Acquire the ability to refine the soul successfully holy life. As Lord Shiva is the central Creator in Hinduism for countless devotees, varied legends correlated with him uplift his prestige as invincible divine energy

Om is a very powerful word in Indian beliefs and is cherished as a religious symbol. There are no defined rules as to how Aum chanting is to be done; moreover, this word has filled pages in the Vedas, the Upanishads, and other Hindu texts. Aum is considered divine in all the three Dharmas: Hinduism, Buddhism and Jainism.

It is also known as Onkara, Omkara, and Prana.  The Brahman understanding equates Om to Bhur- bhuvah- Svah, the latter exemplifying the Vedas. It is also recognized as helpful for meditation, as it rejuvenates and revives the positivity within us.

Many scholars state that these philosophical texts recommend Om as a ‘tool for meditation’. It rationalizes various implications that evolve in the mind of the one meditating, ranging from artificial and sense-appeasing to the highest concepts such as the law of the Universe, dignity of life, Brahman, Atman, and self-knowledge.

What is Om? As explained in the Upanishads………

It is mentioned in the Katha Upanishad as “The word” which all the Vedas proclaim, that which is expressed in every Tapas, that for which they live the life of a Brahmachari. Understand that word in its essence: Om! That is the word. Yes, this syllable is Brahman, this syllable is the highest. He who knows that syllable, whatever he desires, is his. – Katha Upanishad, 1.2.15-1.2.16.

It suggests the means to knowing oneself and described as – That which is flaming, which is subtle than the subtle, on which the words are set, and their inhabitants- That is the indestructible Brahman. It is life, it is speech, it is mind. That is real. It is immortal. It is a mark to be penetrated. Penetrate it my friend.

Taking as a bow the great weapon of the Upanishad, one should put upon it an arrow sharpened it with a thought directed to the essence of That, Penetrate that imperishable as the mark, my friend. Om is the bow, the arrow is the Soul, Brahman the mark, By the undistracted man is it to be penetrated, One should come to be in it, as the arrow becomes one with the mark.- Mundaka Upanishad, 2.2.2-2.2.4

It is a part of the Upanishads which consist of the verses 1.14 and 1.16 that describe Aum as a tool of meditation empowering one to know the God within oneself.

It also speaks of Om as an indescribable, impersonal Brahman. Om is the Pratigara with a hymn. Likewise is tatha with a song. But Om is something divine, and tatha is something human. – Aitareya Aranyaka 23.6

I am the father of this world, Mother, Ordainer, Grandfather, the Thing to be known, the purifier, the syllable om, Rik, Saman and also Yajus- cited in Bhagavad Gita 9.17 is said by Krishna to Arjuna.

In Devanagari, one finds the Hindi letter of ‘u’ in bold with a Chandrabindu on top as the representation of Om. You can also find this symbol on coins that were in use in ancient times. Om is based on different scripts like Devanagari, Gujarati, Sourashtri, and historical Marathi Script.

Om Parvat is articulated as a divine place by Hindus and the snow clothed peaks are seen as the representation of Om. This sacred place is considered to be a sanctuary for devotees since time immemorial. Often gazed at as a perfect embodiment of om meaning, symbol and power. It has a nearby stream called “Jonglingkon Lake”, and it is also sacred as lake Mansarovar is, in Hinduism. Near to Adi Kailash mountain is this peak located in the Darchula District of Sudurpaschim Pradesh, Nepal and Pithoragarh District of Uttarakhand, India. The international border between Nepal and India gallops across its pinnacle point.

The mountain has a distinct direction, near Sin La pass and near Brahma Parvat, the base camp of Adi Kailash is 17km from the Kutti Village at the spiritual Jolingkong Lake, where there exists a Hindu Shiva temple. The yatra to the Kailash commences by scaling the Darma Valley and then getting on to Kuthi Yatra Valley in India via the Sin La pass.

It is a promising place to make one’s vacation memorable, and indubitably a sight worth the eyes.

While chanting Aum, the three letters should be chanted in the correct way so that one finds fulfillment in his or her prayers.

Commencing with the letter “A” should be enunciated short, not too extended while in meditation.

Later “U” is pronounced as “oo” which is the celestial vibration of conservation. One should be absolutely composed while chanting. It is a note that carries a pitch slightly lower likewise the first letter and impacts on introspection are different.

Last but not the least “M” pulls out all composition back into the absolute on the verge of universal progression. And the pitch is the lowest of all when in meditation.

Never overlook the chant as something mere, and outdated. The aum sound is universal in nature sung in school assemblies and often put forward by our elders, who taught us that our surrounding environment makes a sound as hum if we listen carefully.

The true yogis of the past and present who infuse their existence with the divine Aum, have preached with their very lives the essence of Aum. During the time of Pooja and kirtan, the chanting of this sacred term in rhythm with the instruments creates a positive aura around those involved in the chant.

What we all remember to do is merely open our mouths and allow a sound to issue forth which is nothing much than squandering one’s energy and time. Belief is what makes an ordinary mortal to seek out the limitless, birthless and infinite thus, it is everything, so acknowledge that while you are chanting then no doubt the experience will be peaceful and divine.

What relation does meditation have with the divine aum sound?

It is a delightful way to stimulate your body and to comprehend the true spiritual nature of all creation. Learn about the importance of meditation and yoga. By inwardly obeying the pitch of Prana to its source, the yogi’s consciousness is carried aloft to God. This sound is the head of all tones. It is a connection between matter and spirit.

Then it must infiltrate through the silver star opening into the spirit, in the boundless region of infinity. This golden, blue and silver light contains all the atomic, electronic and lifetronic cosmic vibrations. The aura which is generated when high on meditation and chanting, in sync with the cosmic infinite is likened to the glow that emanates from saints, and not some creation of colourful imaginings.

The inner force with which we drive towards self-realization by chanting Aum is the whole being, as declared by Paramahansa Yogananda.

The benefit of chanting om as elucidated by Maharishi Mahesh yogi is in gist a “Being glorifying his karma”. Which means that when the jiva with its dualistic karma touches a pure being (sat). His karma is burnt, or refined and upgraded. Aum and Prana are indeed sat-Chit-Ananda; the pure existing consciousness and bliss which is the relative definition of God himself.

This communication with God through meditation that is free from falsehood and degeneration alleviates one’s state of life to the state of absolute peace and happiness. The rishis and yogis have attempted to tell us that Aum is precise. And the three letters together represent the divine sound which is all-encompassing and all-transcending.

I believe in God, he is everything

Rishis have described Aum as a mantra for transcendental meditation. Thus, when one arouses a deep desire to sense and worship God he or she will definitely realize the beyond and infinite.